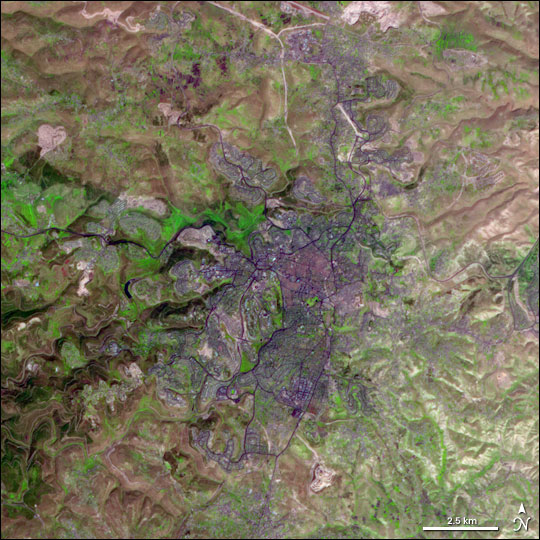 The ancient city of Jerusalem is cloaked in shades of purple in this image based on data acquired by the Advanced Spaceborne Thermal Emission and Reflection Radiometer (ASTER) on NASA’s Terra satellite on April 3, 2000. Using shortwave infrared, infrared, and red wavelengths (ASTER bands 4, 3, and 2) in the traditional red, green, and blue channels of the image creates this false-color version of the city in which developed areas are purple, vegetation is green, water is deep blue or black, and naturally bare (or thinly vegetated) ground is pinkish-brown.

Just to the right of the center of the scene is the downtown area, which appears a brighter purple than the surrounding parts of the city, perhaps because it is more densely developed or the materials or types of structures in that part of the city are different. At the southern edge of the area, a bright green spot shows the location of the Ha-Atsma’ut Garden.

Along the old city’s eastern edge, a pinkish rectangle is the plaza on which the Dome of the Rock (dot in center), an Islamic holy site, is located. Just to the south is the Al Aqsa Mosque. This area also encompasses land that is sacred to Jews. Known as the Temple Mount, the area is believed to be the site of the temples of the Jewish kings, including King Solomon and King David. On the eastern edge of the old city, beyond the Temple Mount, lies the Mount of Olives.