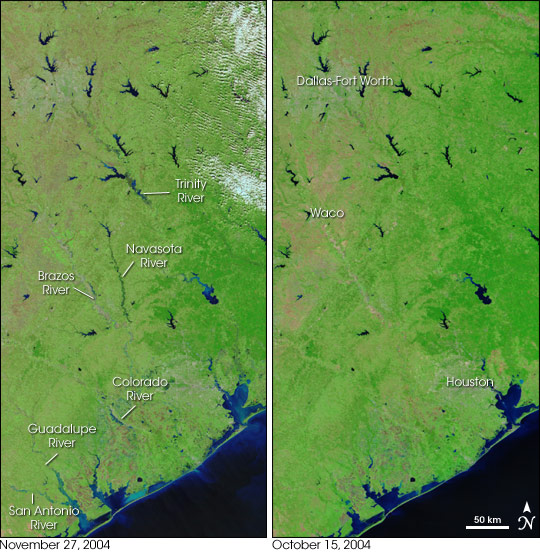 November 2004 turned out to be the wettest November on record for many Texas communities as a train of storms swept across the state. Austin, the state's capital, measured a record 14.40 inches of rain--the previous record was 10 inches, set in November 2001--and many other cities also saw unusually high rainfall totals. As the rain drains into the Gulf of Mexico, it is running off saturated ground and pushing rivers past flood stage.

Several rivers appeared fuller than normal on November 27, 2004, when the Moderate Resolution Imaging Spectroradiometer (MODIS) on NASA's Terra satellite captured the image on the left. In these false-color scenes water is black and blue against the bright green vegetation. Bare ground is pink. Compared to water levels on October 15, the San Antonio, Guadalupe, Colorado, Brazos, Navasota, and Trinity Rivers all appear to be flooded. Flooding along the Colorado River forced evacuations in the town of Wharton on November 26, according to local news reports, and water levels still look high on November 27.

Additional signs of flooding can be seen in the color of the water itself. Clear water is black in these images, but sediment turns the water blue. The rain appears to have washed sediment into the rivers, lakes, and the Gulf because the water is much lighter in color at the end of November than in October.

Heavy rains inundated Texas throughout November 2004. By the end of November, several Texas rivers appeared to be flooded in MODIS imagery.