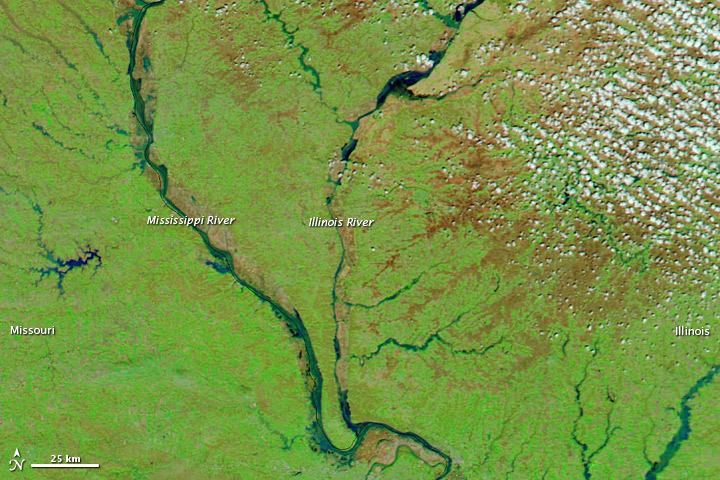 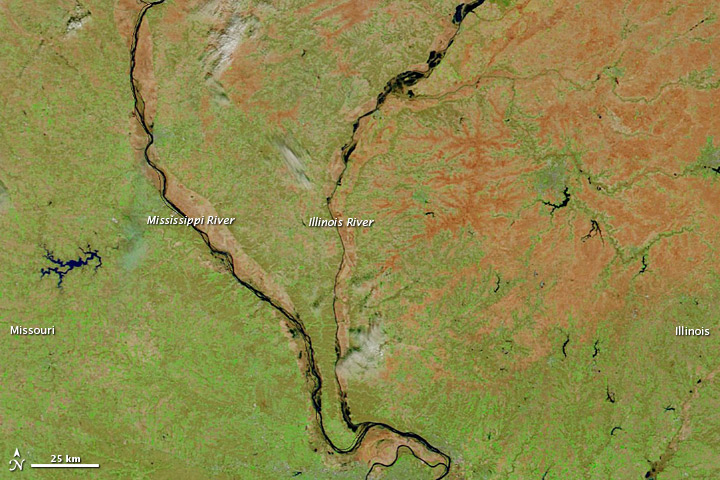 A week of heavy rains caused flooding in multiple Midwestern states in April 2013. The Associated Press reported that some areas received up to 7 inches (18 centimeters) of rain, and some rivers burst their banks. High water forced road closures and evacuations, and inundated thousands of acres of farmland.

These images use a combination of infrared and visible light to increase the contrast between water and land. Water ranges in color from electric blue to navy; vegetation is bright green; bare ground appears in shades of red-brown. Clouds range from white to pale blue-green, and some cast shadows. The color of the April 20 image (compared to April 5) reflects the normal progression of spring vegetation growth, though it is possible there is some extra greening from recent rains.

In early April, some stretches of the Mississippi and Illinois rivers were confined to braided river channels. But by April 20, the water rose high enough to merge some channels and spill onto floodplains in multiple locations. Water generally appears lighter in color in the April 20 image, likely because of heavier loads of mud and sediment.

On April 22, 2013, the Advanced Hydrologic Prediction Service reported flooding at many locations along the Mississippi and Illinois Rivers, including major flooding just north of St. Louis.

Acquired on March 17, 2010 (top), and August 5, 2009 (bottom), these false-color images show differences in vegetation and river levels at different times of year.