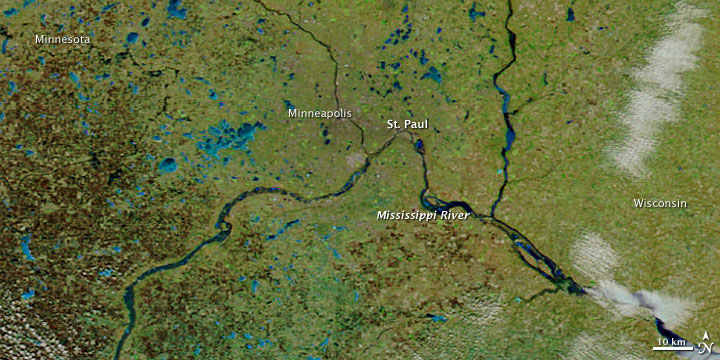 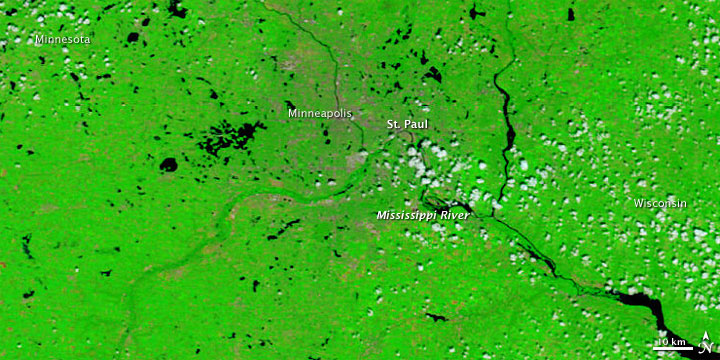 Authorities in St. Paul closed streets as river waters rose in Minnesota in late March 2010. The National Weather Service predicted that the Mississippi River would reach major flood stage in St. Paul on March 21 and would crest at 19.5 feet on March 24.

The Moderate Resolution Imaging Spectroradiometer (MODIS) on NASA’s Terra satellite captured these images of the Twin Cities region on March 17, 2010 (top), and August 5, 2009 (bottom). Both use a combination of infrared and visible light to increase the contrast between water and land. Vegetation appears bright green. Clouds appear sky blue. Water varies in color from electric blue to navy. Bare ground ranges in color from dark brown to tan.

Taken in different seasons—late winter and mid-summer—these images not only show different water levels in the Mississippi and other rivers, but also dramatically different amounts of vegetation. While much of the region is heavily vegetated in August 2009, river levels are low enough to make the water bodies nearly invisible. (Tree cover along the riverbanks may partly obscure the rivers.)

In contrast, the image from March 2010 shows vegetation just beginning to emerge from winter’s chill. Differences in vegetation between August and March are especially visible in the west, in what appears to be a large patchwork of agricultural lands. Compared to the previous summer, the Mississippi and other rivers in the region appear swollen. Some of the electric-blue hues in water bodies away from the rivers might result from lingering ice. Springtime rains and snowmelt often conspire to raise water levels.

Acquired on March 17, 2010 (top), and August 5, 2009 (bottom), these false-color images show differences in vegetation and river levels at different times of year.