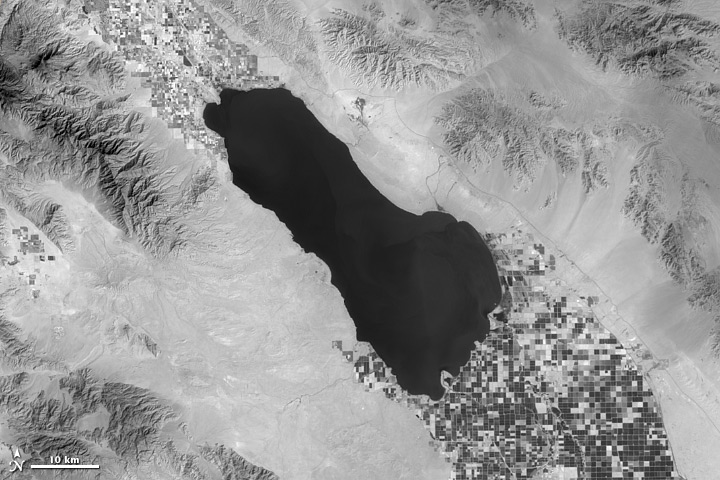 It looks like an artistic, black-and-white image of a dramatic landscape, but the top image above tells a story. It is a story of water in the Southern California desert, but it is not so much about the unusual Salton Sea as it is about the checkerboard of irrigated farmland stretching north- and southward from the artificial inland sea.

The images above were acquired on March 24, 2013, by the Landsat Data Continuity Mission (LDCM) satellite. The top image is from the Thermal Infrared Sensor (TIRS), which shows the amount of heat (thermal energy) radiating from the landscape. Cooler areas are dark, while warmer areas are bright. For comparison, the lower image from the Operational Land Imager shows the same scene in natural color.

“What you’re looking at is infrared light that’s generated by the Earth itself,” said Dennis Reuter, TIRS instrument scientist at NASA’s Goddard Space Flight Center. The thermal energy emitted by the land surface, water bodies, and vegetation excites electrons and creates a blackbody radiation signal. The detectors on TIRS can pick up and measure the strength of those signals in two different bands corresponding to temperatures on the ground.

The view is similar to what you’ve seen on television crime shows when police use thermal imagers to track warm-bodied suspects moving inside a building. With LDCM and the other Landsats, scientists often use the thermal bands to map water.

Dark pixels in the thermal images—representing cooler areas—help water managers determine where water is being used for irrigation. In the TIRS image above, the dark squares are agricultural fields, where plants absorb water and the “sweat” it out through a process called transpiration. Plants cool down when they transpire, so the combination of water evaporating from the plants and the ground (evapotranspiration) lowers the temperature of the irrigated land. As Reuter noted, “We’re using the temperature of a plant as a sort of surrogate measurement for the irrigation going on.”

LDCM, the newest spacecraft in the Landsat family, was launched on February 11, 2013. When the on-orbit calibration and checkout phase of LDCM is over, the satellite will be renamed Landsat 8 and handed over for operation by the U.S. Geological Survey. 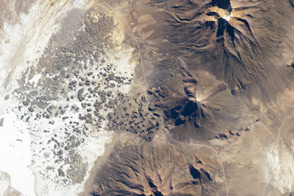