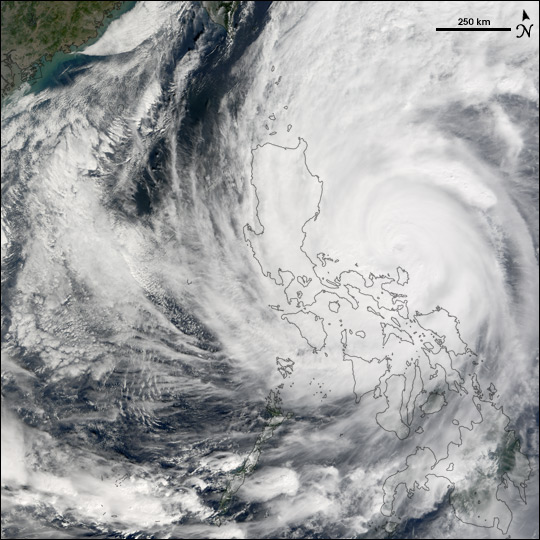 Powerful Typhoon Nanmadol was preparing to make landfall in the Philippines on December 2, 2004, over the already battered Aurora province. Over the past two weeks, Luzon, the main island in the Philippines, has been lashed with three tropical storms—Nanmadol is number four. The toll from the first three storms, the most recent of which was Monday, is well over 1,000 with 479 dead and 560 missing, according to Reuters. Many of the deaths occurred along Luzon’s east coast where floods and landslides buried three towns. Nanmadol’s effects were already being felt over Luzon’s east coast late on December 2, and many fear that the storm will make the situation worse. The government of the Philippines has already requested international aid to meet the needs of those whose homes were destroyed.

This Moderate Resolution Imaging Spectroradiometer (MODIS) image shows Typhoon Nanmadol at 4:45 UTC, 12:45 p.m. in Manila. At that time, the storm had sustained winds of 240 kilometers per hour (150 mph) with gusts up to 296 kph (184 mph). Later in the day, the Joint Typhoon Warning Center reported that the storm’s winds had slowed to 204 kph (127 mph) with gusts to 250 kph (155 mph). The storm is expected to move northwest over the Philippines, then turn northeast over Taiwan.

The fourth tropical storm to strike the Philippines in two weeks moved ashore on December 2, 2004. The TRMM satellite captured this image of the weakening storm after it moved across Luzon.

Typhoons Mitag (right) and Hagibis (left) flank the Philippines in this image taken by MODIS on November 25, 2007. At that time, Mitag was about to strike the Philippine island Luzon with winds of 150 kilometers per hour.