Spring in the Southern Ocean 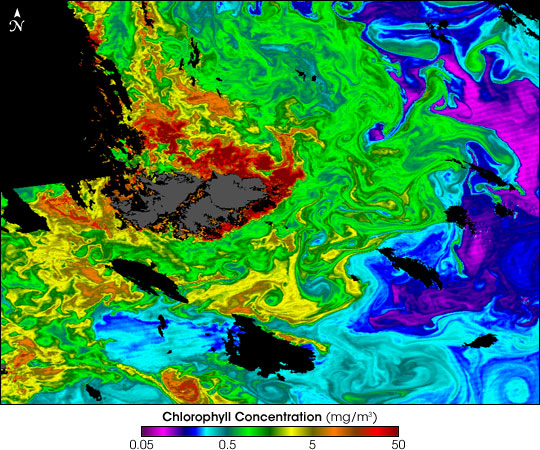 It’s mid spring in the South Atlantic, and life is blooming in the ocean there. The image above uses rainbow colors to show the location and concentration of microscopic marine plants (phytoplankton) around the Falkland Islands (shown in light gray left of center in this scene) on November 22, 2004. The data for the image came from the Moderate Resolution Imaging Spectroradiometer (MODIS) on NASA’s Aqua satellite. The black patches show gaps in the data due to cloud cover.

The rainbow colors shown here represent the concentrations of chlorophyll (in milligrams per cubic meter) at or near the surface of the ocean. Chlorophyll is the pigment found in phytoplankton that gives them their green color. (Like land plants, phytoplankton use chlorophyll for photosynthesis.) Scientists use MODIS data to determine how much of the light at certain visible wavelengths is reflected from the surface of the ocean and how much is absorbed. Because chlorophyll absorbs incoming visible light, scientists can use the comparison of absorbed versus reflected light to estimate the abundance of chlorophyll.

The high concentration of phytoplankton in this image is due, in large part, to the convergence of two major ocean currents in the South Atlantic. The relatively warm Brazil Current flows southward along the eastern coastline of Argentina while the cold Malvinas Current is an offshoot of the much larger Antarctic Circumpolar Current. The Malvinas Current branches off and veers northward, running parallel to the Argentina coast, east of the Brazil Current. Where the two currents touch and interact, many complicated eddies and current patterns are created. In general, the interacting currents produce a strong upwelling movement of seawater, carrying nutrients up from the depths. This influx of nutrients helps stimulate vigorous phytoplankton blooms like the one pictured above.

Notice how the eddies and ocean currents concentrate the phytoplankton in some areas in this image while spreading them out in other areas. The resulting gradients in chlorophyll concentration across the region make the water flow patterns visible to satellite sensors, such as MODIS. Such phenomena are interesting to oceanographers because they offer opportunities for studying how the physical state of the ocean influences marine life.