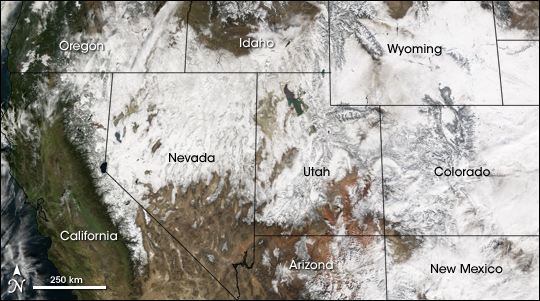 The Sunday after Thanksgiving is traditionally one of the busiest travel days of the year in the United States as people return home from the four-day weekend. Sunday, November 28, 2004, was no exception, but this year, Mother Nature snarled traffic across a large swath of the west with an intense snow storm. The storm dumped up to 24 inches (0.6 meters) of snow on the mountains of southern Utah, and blanketed the surrounding states.

The Moderate Resolution Imaging Spectroradiometer (MODIS) on NASA’s Terra satellite captured this image the following day, on November 29, after the clouds moved out. The storm’s path is clearly visible in this image: a track of white extends from southeastern Oregon and the Sierra Nevada Mountains in California to Colorado and New Mexico in the east. The National Weather Service reports that the storm moved east across the Plains States of Nebraska, Kansas, Oklahoma, Texas, Missouri, and Iowa on November 29 and November 30.

The snow highlights some interesting features of the Western United States that might not otherwise be obvious in satellite imagery. Sandwiched between the straight diagonal line of the Sierra Nevada Mountains in the west (the straight edge of the snow) and the Rocky Mountains in Central Utah in the east is the Great Basin Desert. This high desert basin covers a heart-shaped region of southern Oregon, Nevada, Utah, and southern Idaho and is clearly outlined in snow. Hemmed between two large mountain ranges that trap moisture from the east and the west, it is the United States’ largest desert. It receives on average 7-12 inches of precipitation every year. The water that does fall in the region drains to interior, closed basins instead of the ocean, giving the region its name. The Great Basin Desert is made up of a series of mostly north-south running mountain ranges and valleys that give the land a wrinkled, wash-board appearance, particularly in Nevada.

The snow highlights elevation change elsewhere in the image. The imposing Rocky Mountains appear slightly darker than the valleys around them, and the peaks and high plateaus in the south are covered in snow while the pink desert lowlands remain bare. On the right edge of the image, the flat plains of eastern Wyoming and Colorado are an even, uninterrupted white.

A major storm swept across a large swath of the Western United States over the weekend, putting a halt to holiday travel in many places.