MODIS) on NASA’s Terra satellite on January 13, 2008. These organisms, called phytoplankton, reflect light, coloring the ocean with whimsical swirls of blue and green."> 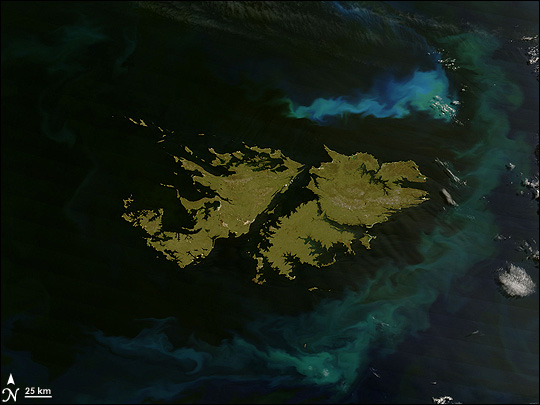 Millions of tiny, single-celled plant-like organisms ring the Falkland Islands in this photo-like image taken by the Moderate Resolution Imaging Spectroradiometer (MODIS) on NASA’s Terra satellite on January 13, 2008. These organisms, called phytoplankton, reflect light, coloring the ocean with whimsical swirls of blue and green. The bloom traces the course of the Malvinas (Falkland) Current, which sweeps north around the Falkland Islands and along the east coast of South America. A branch of the Antarctic Circumpolar Current, the strong current is cold and laden with nutrients. Because the current brings nutrients into the sunlit surface waters where plants can grow, the Malvinas Current often feeds large blooms such as this one.

Phytoplankton are the base of the marine food chain, so regions in which phytoplankton flourish tend to host a wide diversity of life. The tiny plants also play a large role in the global carbon cycle. Like larger plants, phytoplankton absorb carbon dioxide from the atmosphere and turn it into carbohydrates during photosynthesis. When the phytoplankton (or the animals that eat them) die, some of their remains sink to the ocean floor, transporting the carbon to the bottom of the ocean. 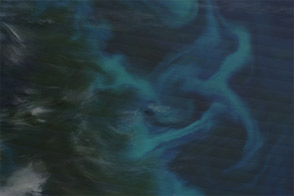 Phytoplankton around the Falkland Islands