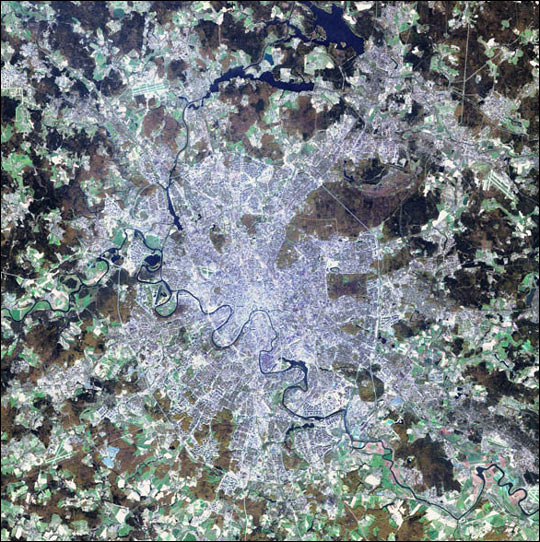 Moscow, the political and economic heart of Russia, sits on the far eastern end of Europe, roughly 1300 kilometers (815 miles) west of the Ural Mountains and the Asian continent. The city boasts a population of nine million and encompasses an area of 1035 square kilometers (405 square miles). The Moscow River runs through the center of the city, and the Kremlin, the seat of the Russian government, lies in the direct center.

Moscow is thought to have been founded in the 12th Century by Yury Dolgoruky, Prince of Suzdal, who hosted a big feast on the site. The city was shortly after established as a trading route along the Moscow River. Ivan III, who is largely credited with uniting all of Russia, built the Kremlin’s cathedrals and declared Moscow the capital of his new kingdom in the 15th century. In the 18th century, Peter the Great moved the capital to St. Petersburg, where it remained until the Bolsheviks brought the seat of government back to Moscow in 1918. Over the years the city has been sacked and burnt to the ground by the Tartars, the Poles, and the French. Thanks to the resilient spirit of the Russian people, the city remains as vital as ever. Now it is as capitalist in nature as London or New York, and everything from Big Macs to BMWs can be found on its streets.

The blue-gray pixels in this false-color image are urban areas. The light green areas surrounding the city are farms and the brown regions are more sparsely vegetated areas. This image of Moscow was acquired by the Enhanced Thematic Mapper plus (ETM+), flying aboard the Landsat 7 satellite. July 23, 2002, marks the 30th anniversary of the Landsat program. (Click to read the press release—Celebrating 30 Years of Imaging the Earth.) The Landsat program has been particularly instrumental in tracking land use and land cover changes—such as increased urban growth—over the last three decades.