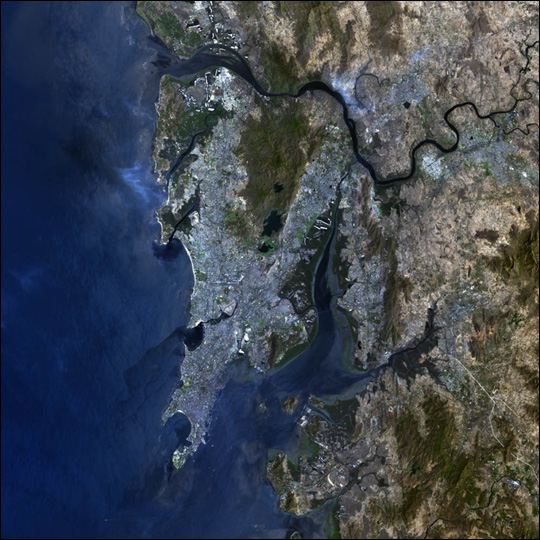 Formerly known as Bombay, the city of Mumbai is situated on India’s west coast, on the Arabian Sea, roughly 500 km (310 miles) south of the Tropic of Cancer. Its large harbor and ideal location facing Africa, Europe, and the Middle East make it an excellent city for trade. Sometimes referred to as the “Gateway of India,” Mumbai handles more than one third of the country’s foreign trade. The city supports a population of more than 12 million people in an area of roughly 619 square km (239 square miles).

The port was acquired in 1534 by Portugal, which named it Bom Bahia, meaning “beautiful bay.” Originally, the city rested upon seven small islands, mostly basaltic bedrock from earlier lava flows. These islands are now connected to one another by reclaimed land, but each island, or neighborhood, still retains a distinct identity within the city. (For more details, visit Welcome to Bombay: The Gateway of India.)

The blue-grey pixels in this false-color image are urban areas. The dark green areas are heavily vegetated surfaces while the light brown regions are more sparsely vegetated. This image of Mumbai was acquired by the Enhanced Thematic Mapper plus (ETM+), flying aboard the Landsat 7 satellite. July 23, 2002, marks the 30th anniversary of the Landsat program. (Click to read the press release—Celebrating 30 Years of Imaging the Earth.) The Landsat program has been particularly instrumental in tracking land use and land cover changes—such as increased urban growth—over the last three decades.