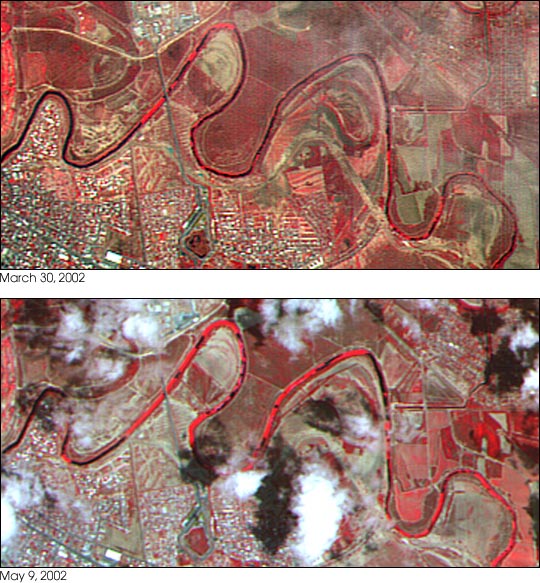 These images acquired by the Advanced Spaceborne Thermal Emission and Reflection Radiometer (ASTER), flying aboard NASA’s Terra satellite, demonstrate the potential of satellite-based remote sensors to monitor infestations of non-native plant species. These images show the vigorous growth of water hyacinths along a stretch of the Rio Grande in Texas. The infestation had grown so dense in some places it was impeding the flow of water and rendered the river impassible for boats.

The hyacinth is an aquatic weed native to South America. The plant is exotic looking and, when it blooms, the hyacinth produces a pretty purple flower, which is why it was introduced into North America. However, it has the capacity to grow and spread at astonishing rates so that in the wild it can completely clog the flow of rivers and waterways in a matter of days or weeks.

The top image was acquired on March 30, 2002, and the bottom image on May 9, 2002. In the near-infrared region of the spectrum, photosynthetically-active vegetation is highly reflective. Consequently, vegetation appears bright to the near-infrared sensors aboard ASTER; and water, which absorbs near-infrared radiation, appears dark. In these false-color images produced from the sensor data, healthy vegetation is shown as bright red while water is blue or black. Notice a water hyacinth infestation is already apparent on March 30 near the center of the image. By May 9, the hyacinth population has exploded to cover more than half the river in the scene.

Satellite-based remote sensors can enable scientists to monitor large areas of infestation like this one rather quickly and efficiently, which is particularly useful for regions that are difficult to reach from on the ground. (For more details, click to read Showdown in the Rio Grande.)