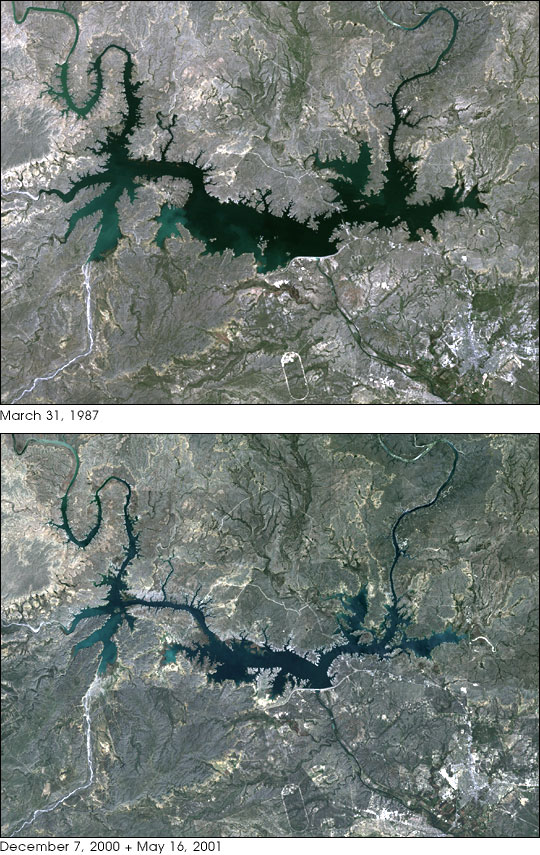 The Amistad Reservoir is located on the Rio Grande along the border of the United States and Mexico. Combined with the Falcon Reservoir downstream of it, Amistad regulates the flow of the Rio Grande for downstream users. Combined, these two reservoirs are running around thirty-three percent of full capacity, the lowest levels recorded since they were first constructed in the 1960s. During the summer of 2002, it was possible to walk across the mouth of the Rio Grande without getting wet: where the river normally met the sea at the Gulf of Mexico, there was only a dry, sandy beach. U.S. border patrol officers placed an orange nylon fence in what should have been the riverbed to discourage unintended international beach strolls.

This pair of Landsat images of the Amistad International Water Reservoir shows the changes in the lake level between 1987 and 2000. The early image in the spring of 1987 shows a healthy supply of water behind the dam. But by late 2000, water levels had dropped dramatically. This trend has continued and even intensified since these images were acquired.

The reduced water levels are the result of a combination of forces on the water supply. First and foremost is that the area is in the midst of a major sustained drought in which, year after year, land in the drainage basin of the upper Rio Grande has received little in the way of rain or snow. Water deliveries from tributaries in northern Mexico have been well below historical norms for the past decade.

In addition, population in the area has been growing at extraordinary rates. Factories in northern Mexico just across the border have blossomed, bringing people into the area for jobs. In 1970, not long after the Amistad and Falcon international water reservoirs were completed, the population of the lower Rio Grande valley was estimated to be around 1.1 million. In 2003, it is roughly 2.2 million. The population has doubled in just over thirty years. This trend is expected to continue with a population of roughly 4.9 million anticipated by 2030.

But while the population had grown, the water supply has not. The prioritization system for water use in the valley puts municipal needs first. This system has greatly affected agriculture. Between 1997 and 2001, agricultural water supply was reduced by 42% compared to the five years prior. Over a hundred thousand acres of agricultural land have been taken out of production in Cameron and Hidalgo counties since 1992 for lack of water to irrigate them.

Normally, the water released from the reservoir for agricultural maintains the flow of water to the municipal users downstream. But when the agricultural releases are restricted, water flows above and beyond the municipal demands are needed just to maintain the river flow to the cities' water intakes. Further complicating the water situation, water weed infestations clog the waterways and restrict flow, requiring still greater volumes of water to be released from upstream to get the river water to its destinations. In Matamoros, the river level has actually fallen below the city's intake pipes, while in Brownsville last year, the local water authority had to clear clogged weeds off the intake grates.

A final environmental insult of the low water levels is the concentration of pollutants and runoff contaminants in the water. Wildlife that depends on the river, from birds to shrimp, has been adversely affected.

These images were acquired by Landsat 4's Thematic Mapper (TM) sensor on March 31, 1987, and Landsat 7's Enhanced Thematic Mapper Plus (ETM+) sensor on December 6, 2000 and May 16, 2001. The images were joined to make a seamless mosaic, with dates chosen outside times of maximum water use so that water level changes are dominated by long term trends rather than seasonal demand. These are true color images made using red, green, and blue wavelengths (TM/ETM+ bands 3, 2, and 1).