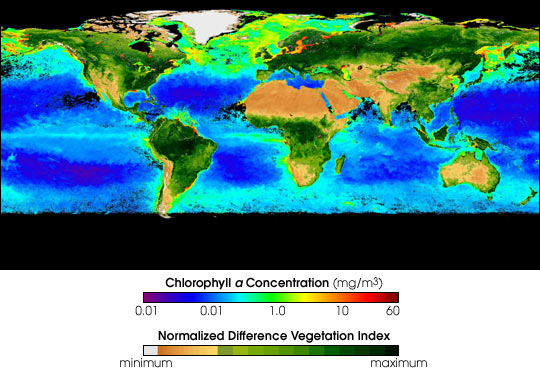 In the last five years, scientists have been able to monitor our changing planet in ways never before possible. The Sea-viewing Wide Field-of-View Sensor (SeaWiFS), aboard the OrbView-2 satellite, has given researchers an unprecedented view of the biological engine that drives life on Earth—the countless forms of plants that cover the land and fill the oceans.

“There is no question the Earth is changing. SeaWiFS has enabled us, for the first time, to monitor the biological consequences of that change—to see how the things we do, as well as natural variability, affect the Earth’s ability to support life,” said Gene Carl Feldman, SeaWiFS project manager at NASA’s Goddard Space Flight Center, Greenbelt, Md.

SeaWiFS data, based on continuous daily global observations, have helped scientists make a more accurate assessment of the oceans’ role in the global carbon cycle. The data provide a key parameter in a number of ecological and environmental studies as well as global climate-change modeling. The images of the Earth’s changing land, ocean and atmosphere from SeaWiFS have documented many previously unrecognized phenomena.

The image above shows the global biosphere from June 2002 measured by SeaWiFS. Data in the oceans is chlorophyll concentration, a measure of the amount of phytoplankton (microscopic plants) living in the ocean. On land SeaWiFS measures Normalized Difference Vegetation Index, an indication of the density of plant growth.