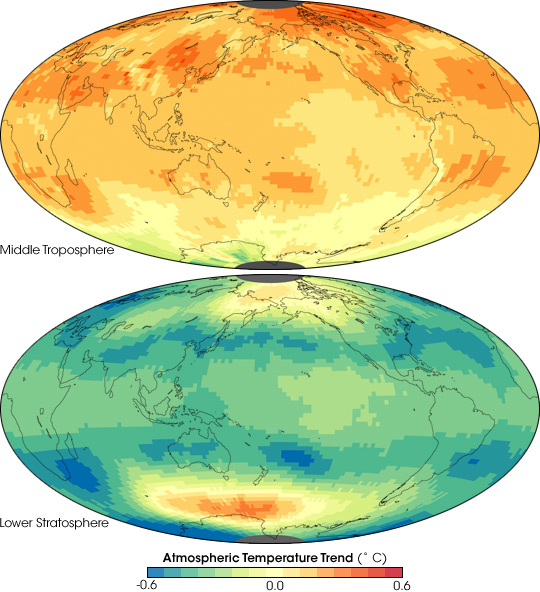 These images show temperature trends in two thick layers of the atmosphere as measured by a series of satellite-based instruments between January 1979 and December 2005. The top image shows temperatures in the middle troposphere, centered around 5 kilometers above the surface. The lower image shows temperatures in the lower stratosphere, centered around 18 kilometers above the surface. Oranges and yellows dominate the troposphere image, indicating that the air nearest the Earth’s surface warmed during the period. The stratosphere image is dominated by blues and greens, indicating cooling.

Globally, the troposphere warmed, and the stratosphere cooled during this period. Local trends varied. The greatest tropospheric warming was in the Arctic, where warming is amplified as snow and ice melt. The Antarctic, on the other hand, showed cooling. Some researchers have explained the localized cooling as a side effect of the ozone hole on atmospheric circulation over Antarctica. Loss of ozone cools the stratosphere, a change which intensifies the vortex of winds that encircle the continent. The stronger vortex isolates the air over the continent, cooling the stratosphere even further. At different times of the year, the unusually cold air dips down from the stratosphere and into the troposphere.

The measurements were taken by Microwave Sounding Units and Advanced Microwave Sounding Units flying on a series of National Oceanic and Atmospheric Administration (NOAA) weather satellites. The instruments record microwave energy emitted from oxygen molecules in the atmosphere. Warmer molecules release more energy than cooler molecules, so scientists can measure the temperature of the atmosphere by recording the amount of microwave energy being emitted. Early analyses of these measurements showed little or no warming in the troposphere, where models predicted that warming should be occurring. For a time, these measurements caused some people to question the validity of global climate models and greenhouse gas warming. Scientists discovered, however, that the satellites carrying the microwave instruments had drifted in their orbits over time, so that more recent measurements were taken at a different time of day than older measurements. Once scientists accounted for this bias and other differences between the individual instruments, the measurements showed a warming trend in the troposphere, consistent with surface observations of rising global temperature.