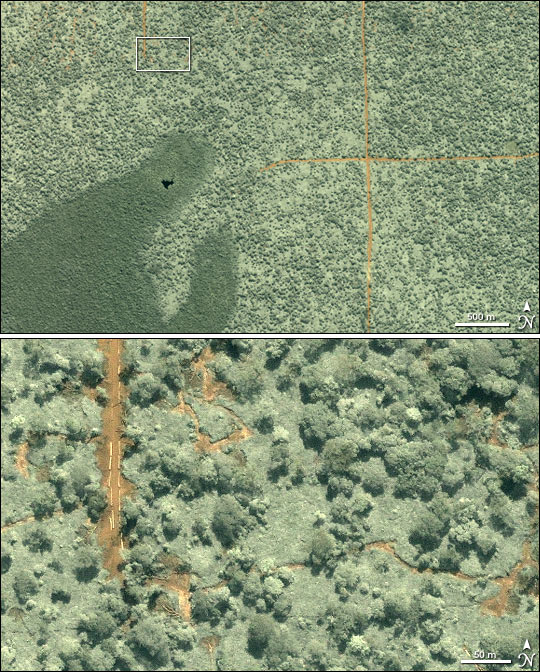 Logging has impacts on forests that go beyond the loss of trees themselves. It can change the number and diversity of other organisms in the ecosystem, open remote areas to poaching, increase the likelihood that people will completely convert the land from forest to cropland or pasture, and change how the ecosystem functions—changing the forest’s carbon or water cycles, for example. In recent decades, industrial logging has intensified in the dense tropical forests of central Africa, but few data sets exist that can help ecologists and policymakers monitor the occurrence and impact of logging over wide areas in that part of the world.

This very high resolution image of northern Republic of Congo was captured on June 27, 2002, by the commercial satellite Ikonos. The wider-area view at top shows dirt logging roads (orange lines) and different types of forest in the area around the border of the Sangha and Likouala regions. The lower view is a close-up image that shows not only part of a logging road, but also felling sites (clearings where trees are cut down) and skid trails (paths where trees are dragged toward the road.) Individual trees or sections of trees stacked on the road at left look like matchsticks.

Two types of forest are shown in the top image. At bottom left is a tropical evergreen forest with an extremely dense canopy, a forest type known locally as limbali forest. Most of the rest of the scene is occupied by a more open forest in which stands of trees (dark green patches) are separated from each other by a sea of lower-growing plants (light green). The appearance of openness, however, is something of an illusion. A dense understory of plants, such as wild ginger that can grow to be 2 meters (about 6.5 feet) tall, makes a thicket so impenetrable that you could not walk through it without a machete. Shadows along the margins of skid trails hint at the thickness and height of the understory. (Scientists are not certain how this type of forest originated, but the wide spacing of the trees is not a result of recent logging activity).

This image is one of hundreds of satellite images from commercial and NASA satellites that scientists from the Woods Hole Research Center used to create a map of logging roads and forest disturbance across 4 million square kilometers of tropical African forests in the three decades proceeding 2003. Northern Congo experienced the most rapid changes during the period; road construction increased from a 1976-1990 average of 156 kilometers per year to over 660 kilometers per year after 2000. In fact, logging roads account for more than 60 percent of the length of all roads in Congo. Beyond logging roads, the felling of trees creates gaps in the forest canopy that range from 200 to 600 square meters.