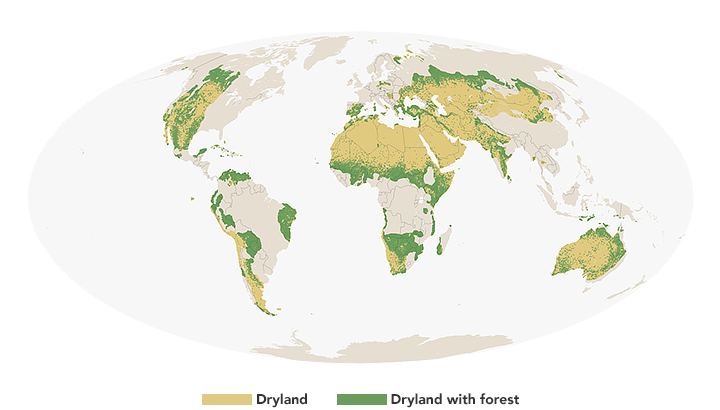 For decades, scientists have struggled to quantify and map the world’s dryland forests. Estimates have varied widely because of differing data formats and resolutions, different mapping approaches, and different thresholds for the definition of “forested” area. Now a new comprehensive study finds that forests in drylands are more extensive than previously reported.

According to the U.N. Food and Agriculture Organization (FAO), drylands cover about 40 percent of the Earth and can range from prairies and savannas to Mediterranean climates to deserts. In general, such areas see no more than 130 centimeters (50 inches) of rainfall per year—often less—and are subject to a lot of heat and evaporation.

In spite of the relative dryness of these landscapes, many of them have ample tree growth. (Sariska National Park in India is a good example.) But those trees can be hard to spot in satellite images and even harder for computer software to distinguish and quantify.

For instance, several conventional forest monitoring methods rely on data from the Moderate Resolution Imaging Spectroradiometer (MODIS) instruments on NASA’s Aqua and Terra satellites. MODIS is great for giving a broad look at the landscape, but it has trouble in places like the African drylands (image below). Unlike densely packed forests in the tropics, trees in the drylands are often spaced out, appearing here and there. To MODIS, such land can appear as bare ground or soil in coarse image analyses. Even where dry forests grow in more densely packed stands, many trees have brown or yellow leaves that can evade detection by satellites.

In the new effort, led by Jean-François Bastin of the FAO, researchers used a combination of computer-aided analysis and scientific crowd-sourcing to analyze imagery and make the first comprehensive global assessment of drylands. The group found that 1.33 billion hectares (5.12 million square miles) of drylands had more than 10 percent tree cover, and 1.08 billion hectares (4.17 million mi2) comprised forest. The group claimed to find “467 million hectares of forest that have never been reported before,” more than 40 percent above previous estimates. Overall, the findings increase estimates of global forest cover by 9 percent.

The map at the top of the page illustrates the group’s findings. Tan areas represent drylands, with green indicating dryland forests. Dryland forests appear on all continents (except Antarctica) and cover large portions of some of them. The natural-color image below is a best-pixel mosaic of African drylands; it was composed from several images captured in 2015 by MODIS. 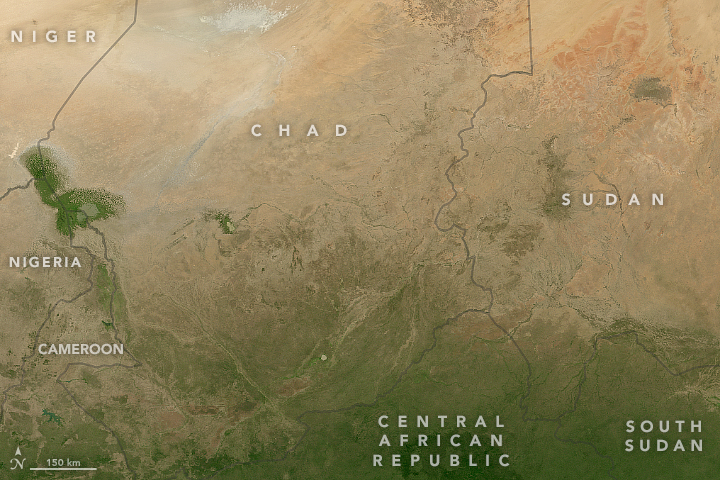 To get this latest dryland forest estimate, Bastin and colleagues organized more than 200 researchers and students from 15 science institutions and universities around the world (including the U.S. Forest Service). “We were able to do this because we were able to work with a lot of people,” Bastin said. “It is not something you can do on the scale of one research lab.”

FAO researchers developed computer algorithms to partially analyze and interpret forest cover in satellite images—from MODIS, Landsat, and very high resolution imagery available in Google Earth—before they could be scrutinized by human eyes. The entire research team examined more than 210,000 forest plots. The results were published in an FAO report and in the journal Science.

According to FAO, “drylands are home to an estimated 2 billion people, 90 percent of whom are in developing countries...yet surprisingly little is known about such ecosystems.” Several models of global warming suggest that drylands will expand by as much as 20 percent by the end of the 21st century, putting food security for people and biodiversity for plants and animals at risk.