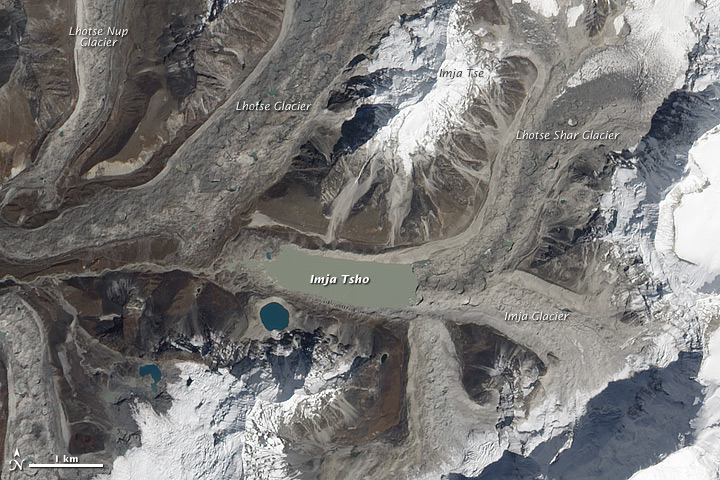 Starting from the western face of Kali Himal, the Imja Glacier flows through eastern Nepal, part of a glacier network that ultimately feeds the Ganges River. In the 1960s, melt water began collecting at the foot of the glacier, creating Imja Tsho. A 2009 study described this lake of melt water as one of the fastest-growing in the Himalaya. Held in place by a terminal moraine, Imja Tsho threatens downstream communities with the potential for a glacial outburst flood.

On October 4, 2010, the Advanced Land Imager (ALI) on NASA’s Earth Observing-1 (EO-1) satellite captured this natural-color image of Imja Tsho and surrounding glaciers. Dirt and debris coat these rivers of ice; like the glaciers feeding it, Imja Tsho appears dull gray-brown. A thin trickle of water exits the lake on its western side, having carved through the natural earthen dam.

As glaciers shrink and meltwater lakes grow, the threat to nearby communities increases. In 1985, another glacial lake in Nepal—Dig Tsho—burst and flooded a new hydropower station, 30 houses, and 14 bridges. The glacial outburst flooded agricultural lands and scraped vegetation from land surfaces, leading to increased erosion from wind and precipitation and increased undercutting by local rivers.

The threat of a glacial outburst flood is not unique to Imja Tsho. In September 2010, the United Nations Office for the Coordination of Humanitarian Affairs reported that, in the Hindu Kush-Himalayan region alone, more than 200 lakes posed a flood hazard.

North of Imja Tsho lies Imja Tse. Nicknamed “Island Peak” in the early 1950s, the mountain once poked through a surrounding ice field. By the time ALI acquired this image, much of that ice had melted away.