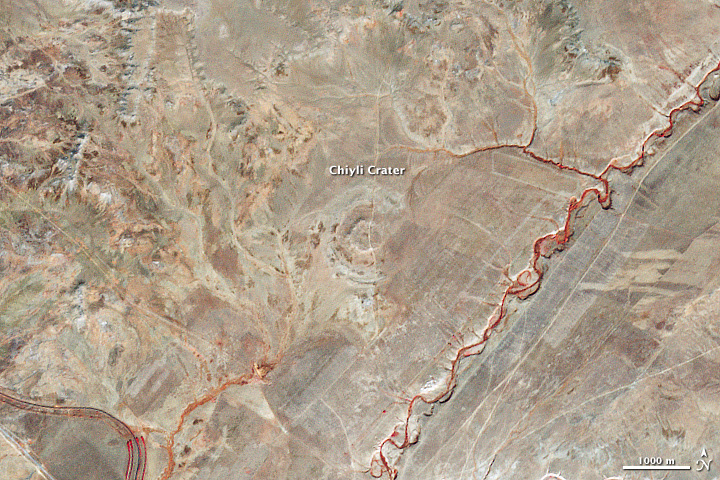 In the grasslands of western Kazakhstan, roughly 320 kilometers (200 miles) north-northeast of the Aral Sea, lies Chiyli Crater. From the perspective of a satellite, the crater is subtle but discernible—concentric rings in the arid landscape, evidence of an extraterrestrial object crashing into our planet millions of years ago.

The Advanced Spaceborne Thermal Emission and Reflection Radiometer (ASTER) on NASA’s Terra satellite captured this false-color image of Chiyli Crater on October 10, 2007. Vegetation appears red, water appears blue, and land with few or no growing plants appears in earth tones. Waterways contrast with their surroundings due primarily to the vegetation clinging to their riverbanks, especially the river southeast of the crater.

Sunlight illuminates south-facing slopes and leaves north-facing slopes in shadow. The innermost ring of Chiyli Crater actually sits at a higher elevation than the outer ring. Some extraterrestrial impacts leave a central peak in the impact crater as the land rebounds.

Chiyli is estimated to be 46 million years old, plus or minus 7 million years. The impact forming this crater occurred during the Eocene Epoch, a period of much warmer climate than today’s, when subtropical conditions extended as far north as the Arctic Circle. Chiyli Crater was one of 40 craters examined in a 2005 study concluding that extraterrestrial impacts tend to occur in clusters separated by periods of 25 to 30 million years. Other craters dated to roughly the same geologic age include Ragozinka, Logoisk, Kamensk, and Montagnais.