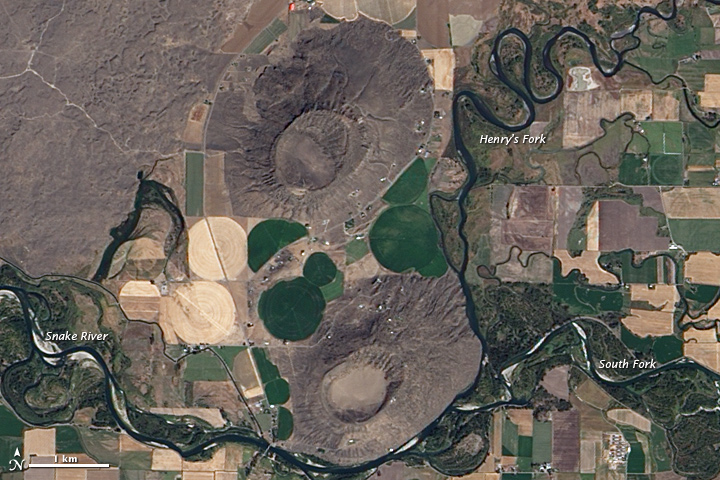 The Menan Buttes are just two of many volcanic cones that rise from the Snake River Plain in southern Idaho. But they stand apart from the others because of how they were formed. The Menan Buttes are tuff cones, formed when magma erupts through water. They are the only such cones formed in fresh water in the United States. They are also among the largest in the world.

The Advanced Land Imager (ALI) on NASA’s Earth Observing-1 (EO-1) satellite captured this image of the Menan Buttes on September 25, 2010. The two circular buttes aren’t the only volcanic features in the image: a faded brown lava flow stretches away from the buttes to the west. Farmland surrounds the Menan Buttes, and to the south, Henry’s Fork and the South Fork come together to form the Snake River. The rivers’ proximity to the cones is key to their formation.

Now extinct, the two volcanoes arose about 10,000 years ago when basalt magma pushed up through ground water (the south butte) and the river known as Henry’s Fork (the north butte). Upon contact with water, the magma swiftly cooled into volcanic glass, while the water flashed to steam and explosively burst from the crater. The violent eruption carried fine fragments of glass (ash), plus small bits of gravel from the river bottom, into the air in a cloud that eventually fell around the crater. The hot ash melded into two solid, glass mountains—tuff cones—that grew with each eruption.

As this photo-like image shows, the Menan Buttes are not perfectly circular. The cones are stretched to the northeast, a sign that winds blew consistently from the southwest throughout the eruption.

The Menan Buttes probably resulted from the same tectonic activity that still forms the Basin and Range Province of the western United States. The parallel mountain ranges and valleys that make up the province are slowly rising as the movement of tectonic plates stretches the Earth’s crust. The thinned crust puts less pressure on the underlying rocks. This allows the rocks to melt into magma that seeps through cracks to the surface, creating many of the cones and lava flows that now dot southern Idaho.

Erosion exposed the subterranean plumbing of an ancient volcano in South Africa.