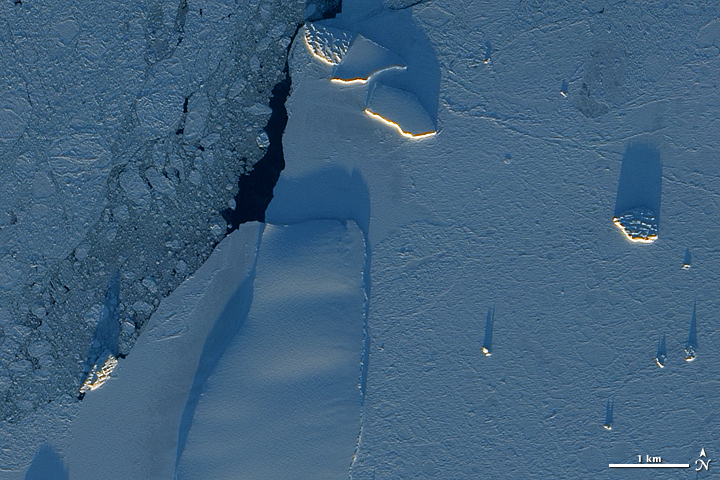 Each December, while darkness engulfs the Arctic, Antarctica enjoys round-the-clock sunlight. The light arrives at a low angle, however, as the Sun makes a daily circuit around the horizon, and icebergs cast long shadows over the surrounding sea ice.

Acquired on December 13, 2010, this image from the Advanced Land Imager (ALI) on NASA’s Earth Observing-1 (EO-1) satellite shows icebergs along the Princess Ragnhild Coast in East Antarctica. Besides distinguishing between icebergs and thinner ice, the low-angled Sun highlights the differences between the icebergs themselves.

Near the top center of the image, two large icebergs sport smooth surfaces. The iceberg next to them, and others along the left and right edges of the image, have mottled surfaces resembling druzy. The differences in texture indicate different histories. The icebergs with rough surfaces likely broke off from the coast, far from this area, and spent time bobbing over the open ocean. Wave action applied pressure to the bottoms and sides, and the pressure propagated up through the ice to the surface. Weak spots fractured, and bits of snow and ice fell into the cracks, widening them further. The icebergs you see above likely bear scars from such jostling. By contrast, smooth icebergs likely originated in this area and have not yet traveled far.

Surrounding the icebergs are two kinds of ice: sea ice and fast ice. Along the left edge of the image, the sea ice is thinner, with gaps that reveal the dark ocean below. Clinging to the shore, fast ice is thicker, although not nearly as thick as the icebergs.