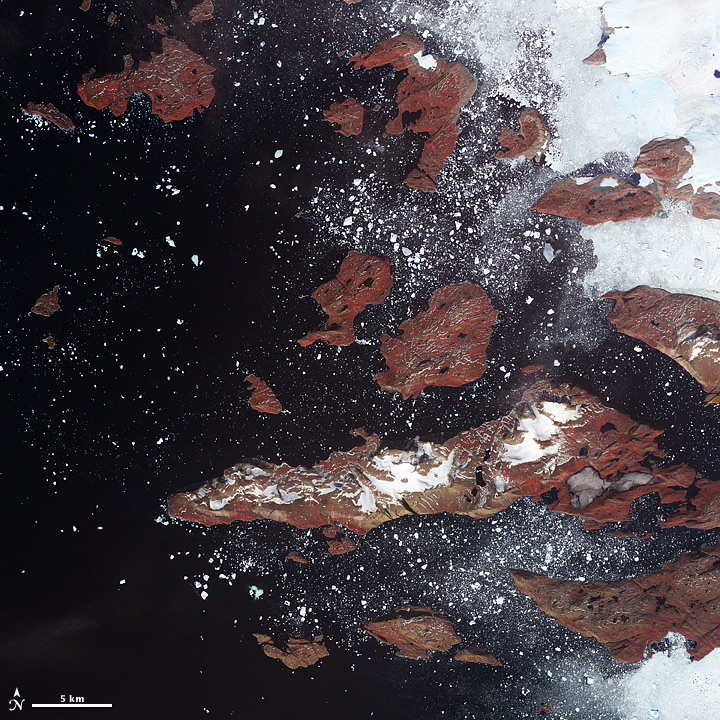 An ice sheet covers almost all of Greenland—about 1.7 million square kilometers (650,000 square miles). It holds so much ice that if it were to melt away entirely, global sea level would rise 7 meters (23 feet). The Greenland Ice Sheet feeds dozens of tidewater glaciers along the island’s coast; as the ice sheet meets the ocean, chunks of ice periodically break off to form icebergs.

A constellation of icebergs floated in Baffin Bay on July 17, 2005, as the Advanced Spaceborne Thermal Emission and Reflection Radiometer (ASTER) on NASA’s Terra satellite captured this image. ASTER combines infrared, red, and green wavelengths of light to make false-color images. Water is navy blue. Snow and ice are mostly white. Surface melting and waterlogging color some of the icy surfaces pale blue. Bare ground ranges in color from brown to red, and red indicates vegetation. Although ice dominates Greenland, grasses and sedges grow along the coast.

The icebergs in Baffin Bay may have broken off from two nearby glaciers—Nunatakavsaup Sermia to the north and Igdlugdlip Sermia (or Illulip Sermia) to the south—although some icebergs might have drifted to this region from farther away. Big masses of snow and blocks of ice, or mélange, occur just off the tongues of the tidewater glaciers. Farther out to sea, beyond the mélange, free-floating icebergs drift in Baffin Bay, pushed by winds and ocean currents.

Although Greenland calves the occasional city-sized iceberg, most of its icebergs are small compared to massive pieces that calve off the Antarctic Ice Sheet. Nicknamed “bergy bits” or “growlers,” Greenland’s smaller bergs actually pose a greater hazard to ships and offshore platforms because they are harder to detect.

Ben Holt, a researcher with NASA’s Jet Propulsion Laboratory, explained, “Greenland icebergs get carried southward along the Labrador Current, which passes around Newfoundland and into the Grand Banks area of southeastern Canada and New England, which is where the Titanic met its demise when it rammed into an iceberg of sufficient size and force to puncture its hull.” After the Titanic accident, the United States and Canada jointly established the International Ice Patrol. Using a combination of ships, aircraft, and satellites, the service monitors icebergs that can affect ship traffic, offshore operations, and even fisheries.