melt zones like the one shown here during the warm summer months."> 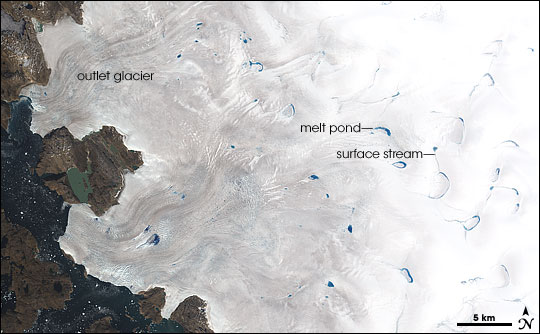 Sapphire-blue pools connected by threadlike streams of water dot the western edge of the Greenland ice sheet in this image, taken on August 6, 2000, by the Enhanced Thematic Mapper Plus sensor aboard the Landsat 7 satellite. Thinner than the 2.3-kilometer-thick center, the outer edges of the Greenland ice sheet develop melt zones like the one shown here during the warm summer months.

But melting is not the only way the massive ice sheet sheds weight. As snow falls over the frozen highlands of Greenland’s interior, it adds its weight to the thick ice sheet. The overall weight of the ice flattens the ice sheet, pushing the outer edges out until they crumble into the Atlantic Ocean as icebergs. This process is visible in the upper left portion of the image where the ice flow is converging into an outlet glacier. White flecks in the water are icebergs that have been shed from the outlet glacier.

The two processes—melting and iceberg-calving—are connected by more than their location on the outer edge of the ice sheet. Melting, it turns out, accelerates ice-berg calving. As the ice sheet melts, water collects in large pools on the ice surface. Streams drain the pools, sometimes carrying water into other pools, but sometimes disappearing into crevasses or cracks in the ice. The crevasses take the water deep into the ice sheet, sometimes even to the underlying rock, where it lubricates the lowest layers of the ice. The lubricated ice flows more quickly toward the ocean, which in turn accelerates the rate at which icebergs break into the sea. The overall result is a greater loss in ice mass than would happen without the influence of melt water streams.

In the 1990s, when scientists began to monitor Greenland closely for signs of global warming, the snow falling on the ice sheet kept pace with the ice and water running off the outer edges. In the next decade, however, the snowfall fell behind. A 2006 study revealed that Greenland’s ice mass decreased about 101 billion tons per year from 2003-2005 (see Greenland Ice Sheet Losing Mass).

NASA Image by Robert Simmon, based on Landsat data from the UMD Global Land Cover Facility