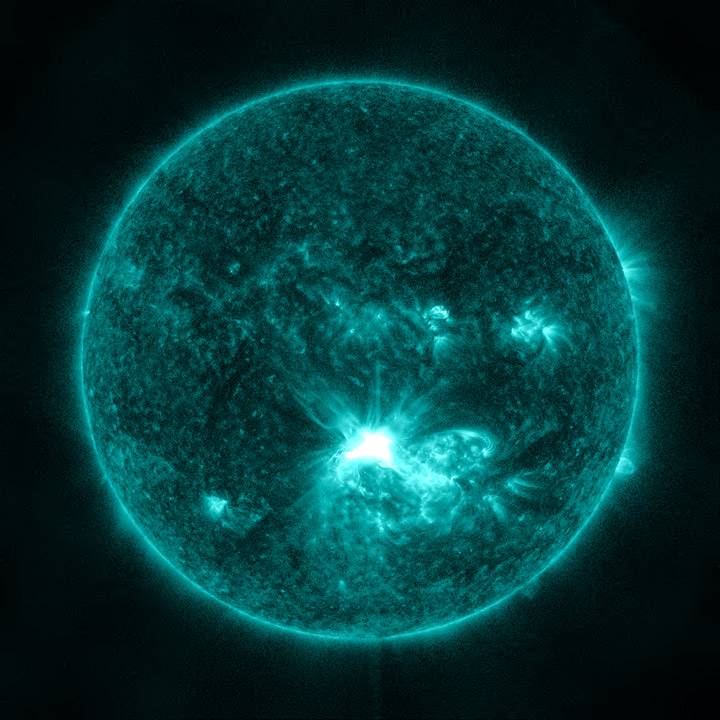 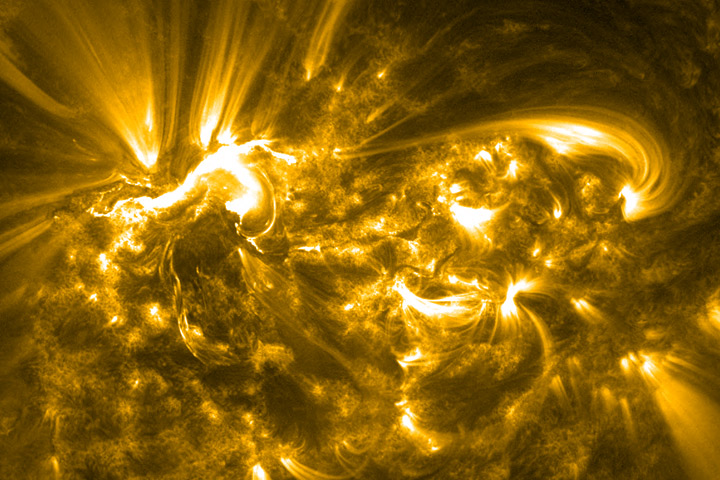 Twelve years after the Earth was buffeted by one of the more potent Sun storms in modern history, our nearest star crackled with activity again. A solar flare erupted on July 12, 2012, followed closely by a companion coronal mass ejection (CME)—a cloud of magnetically charged particles and energy that can disturb Earth’s magnetic field, disrupt satellites and ground-based electronics, and provoke auroras.

The Atmospheric Imaging Assembly on NASA's Solar Dynamics Observatory (SDO) captured these views of the flare in the Sun’s southern hemisphere on July 12, 2012. The top, global image shows the Sun as viewed at 131 Angstroms; the lower, close-up view is 171 Angstroms. Both ultraviolet wavelengths help solar physicists study the fine magnetic structures in the Sun’s super-heated atmosphere, or corona. The yellow and teal are false colors chosen by the science team to distinguish between the spectral bands. Download the movies linked beneath each image to see the active region develop and erupt.

The flare was classified as X1.4, with X being the highest class of flares (A,B,C,M, and X). At 16:52 Universal Time (UTC) on July 12, the explosion launched a stream of particles (solar energetic protons) toward Earth, where they arrived in the upper atmosphere just hours after the eruption. Several outlets reported minor disturbances to Global Positioning System signals and radio blackouts at high latitudes. This is the sixth X-class flare of 2012, a year that could be the peak of the current 11-year solar cycle.

The flare and CME (not visible in the images above) arose from solar active region 1520, which was centered on the solar face and pointed toward Earth. According to scientists at NASA’s space weather modeling center, the CME was traveling toward Earth at 1480 kilometers (850 miles) per second and predicted to arrive around 09:00 UTC (5:00 a.m. U.S. Eastern Daylight Time) on July 14, plus or minus seven hours. The NASA scientists suggested the event could produce a moderate to severe geomagnetic storm of Kp 6–8 on the planetary magnetic (Kp) index that runs from 0 to 9.

Official forecasters at the NOAA Space Weather Center noted at 13:15 UTC on July 13: “The latest model run now indicates the CME associated with yesterday's R3 (strong) radio blackout event will impact the earth's magnetic field around 9:00 a.m. EDT (1300 UTC) on Saturday, July 14. SWPC is forecasting category G1 (minor) geomagnetic storm activity then, with a chance of G2 (moderate) levels at times through July 15. The S1 (minor) solar radiation storm persists just above event threshold. Region 1520 has decayed in the past 12 hours, but is still potentially eruptive.”