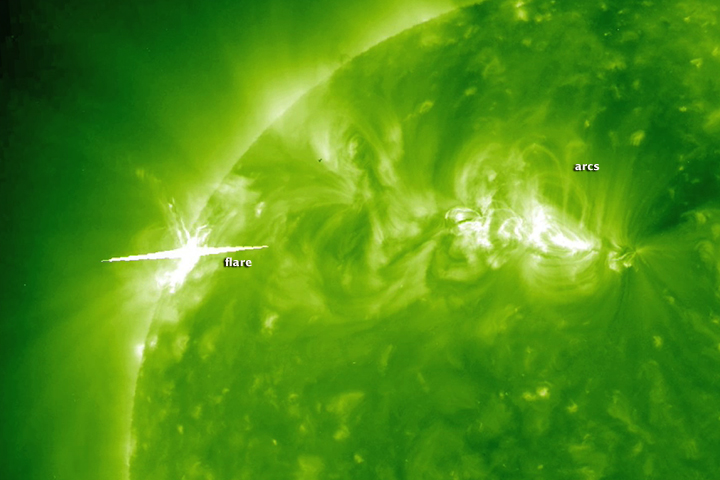 On March 20, 2010, which is the spring equinox, NASA also celebrates Sun-Earth Day. The day is comprised of educational events and activities, including a live web cast with NASA solar scientists and space weather experts. In 2010, Sun-Earth Day focuses on magnetic storms, which bombard Earth with charged particles that can interfere with electronics systems and satellites. This image, captured by NASA’s Solar Terrestrial Relations Observatory (STEREO) Ahead spacecraft on February 12, 2010, shows one such storm (albeit a very small one) brewing in two active areas of the Sun.

Two active regions glow brightly in this ultraviolet image of the Sun. A small flare rises from the active area on the left. Flares are intense explosions on the Sun that blast radiation into space. This one paints a white line across the left horizon of the Sun.

The active area on the right churns with magnetic loops. Arcs of charged particles rise from the surface and are drawn back down again in the magnetic field. A video showing a sequence of STEREO observations, including this one, reveals that a small coronal mass ejection (CME) burst from this region a short time after this image was taken. Like a flare, a CME sends charged particles and energy into space, but CMEs are larger solar storms that both last longer and carry a larger cloud of particles and magnetic field into space than do flares.

Both flares and coronal mass ejections can create space weather if aimed at Earth. The charged particles from large storms blast Earth’s magnetic field, which acts as a shield. The charged particles interacting with Earth’s magnetic field generate intense and beautiful aurora, but they can also be destructive. Solar storms in the past have damaged power grids, causing blackouts, and harmed and destroyed satellites.

STEREO is one of several NASA missions studying the Sun. STEREO was launched to help scientists better understand coronal mass ejections. An improved understanding of solar storms will improve space weather forecasts, which will help limit the damage they cause on Earth.

To learn more about the Sun’s magnetic storms and how they affect Earth, watch NASA’s live web cast on March 20, 2010.