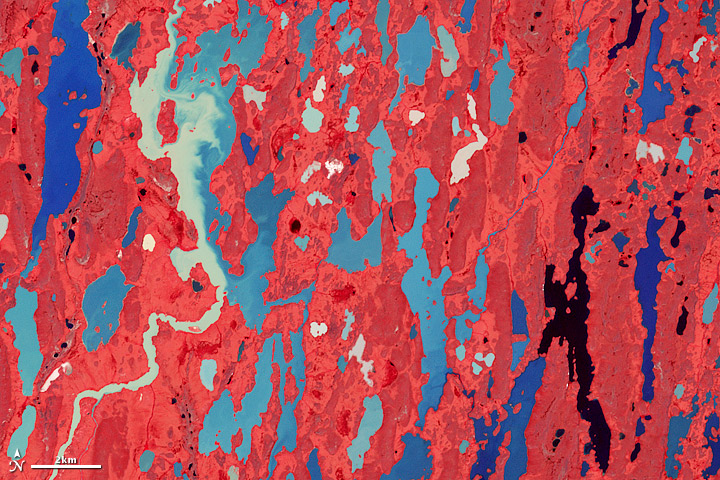 During the last Ice Age, nearly all of Canada was covered by massive ice sheets. Thousands of years later, the landscape of Nunavut Territory—“our land” in the Inuktitut language—still shows the scars of that icy earth mover. Surfaces that were scoured by retreating ice and then flooded by Arctic seas are now dotted with millions of lakes, ponds, and streams.

The image above shows wetlands in the Kitikmeot region of Nunavut Territory, just east of the Queen Maud Gulf Bird Sanctuary and southwest of the village of Gjoa Haven. The image was acquired by the Advanced Spaceborne Thermal Emission and Reflection Radiometer (ASTER) on NASA’s Terra satellite on July 18, 2001. ASTER combines 14 spectral bands in infrared, red, and green wavelengths of light to make false-color images. Water is various shades of blue, green, tan, and black, depending on the amount of suspended sediment (silt and clay) and phytoplankton. Vegetated land is red.

These Arctic lowlands are covered by long, low-rising ridges of glacial till—a mixture of clay, sand, gravel and boulders. “These small hills were glacially moulded by ice as the ice sheet moved to the north,” said Daniel Kerr of the Geological Survey of Canada. “This area became ice-free by about 8,000 years ago, but because of the weight of the ice sheet, the land was depressed and the waters of the Arctic Ocean flooded the land.” Those hills are surrounded by small valleys and flatlands of marine silts and clays, which were deposited by the sea before it retreated and the land surface rose back up (a process known as isostatic rebound).

The region is sometimes referred to as the “Barren Grounds” or “Barren Lands.” It is nearly treeless and largely unsuitable for agriculture. The ground is snow-covered for much of the year, and the soil typically remains frozen to within a few centimeters of the surface (permafrost) even during the summer thaw. Nonetheless, the satellite image shows plenty of surface vegetation in July, including lichens, mosses, shrubs, and grasses. The abundant fresh water of summer also means the area is teeming with flies and mosquitoes.

Nunavut is the largest, newest, and least populated territory of Canada. The Kitikmeot region is the least densely populated part of this mostly uninhabited region, with just over 5,300 people spread out to 0.012 inhabitants per square kilometer. Wildlife such as caribou, muskox, foxes, and grizzly bears vastly outnumber the people. The nearby Queen Maud Gulf Bird Sanctuary is the largest in North America, a refuge for millions of birds that nest and raise their young in the area (including 90 percent of the world’s population of Ross geese, according to the tourist arm of the government of Nunavut).

The landscape of the Kitikmeot region of Nunavut Territory was carved by ice and water.

Spring in the Canadian Arctic

Taken on June 10, 2010, this true-color image captures the western Canadian Arctic in a moment of transformation. Signs of winter are still present, but summer is clearly on the horizon.