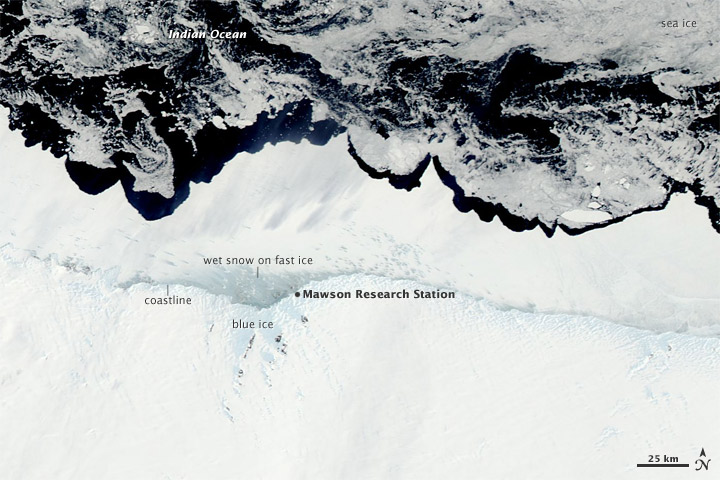 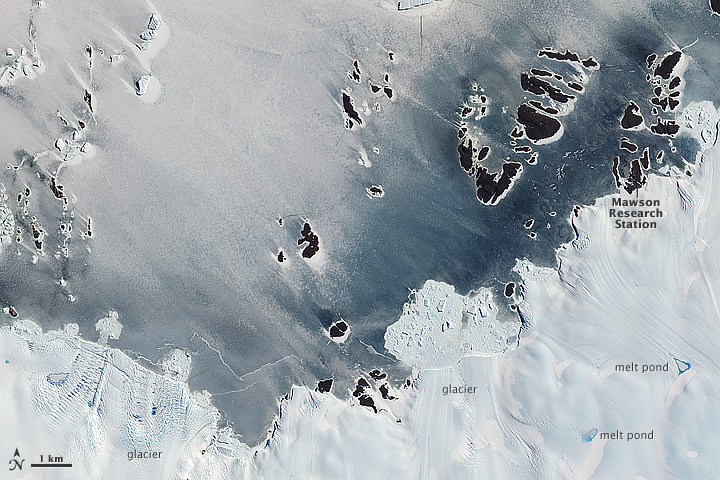 The end of December marks the end of spring and beginning of summer along the coast of East Antarctica. The Sun shines most (if not all) of the time, yet ice still dominates the land and sea. That ice, however, is far from uniform.

Varied forms of ice appear in these images from the Moderate Resolution Imaging Spectroradiometer (MODIS) on NASA’s Aqua satellite and the Advanced Land Imager (ALI) on NASA’s Earth Observing-1 (EO-1) satellite. These natural-color images both show parts of the Mawson Coast, where an Australian-led research station is located. The MODIS image (from December 16, 2011) offers a wide-area view and the ALI image (December 30) gives a close-up centered around the research station.

Along the ice-encrusted coastline floats a broad band of fast ice, which derives its name from the fact that it holds fast to the shore. This thick ice is lighter in color than the thinner sea ice farther offshore (visible in the wide-area view). The sea ice is dynamic, continually forming, melting, and drifting with winds and currents.

Near the shore, wet snow sits on the fast ice, and the water-saturated snow appears gray. Adjacent to that wet snow and on land lies a patch of blue ice, composed of large ice crystals. Wind in this region has eaten away the overlying snow layer to expose pure ice below. In contrast to tiny snow crystals, which appear white, large ice crystals absorb a small amount of red light, so greater amounts of green and blue reflect off the surface.

Descending warm winds evaporate snow cover and lead to strong surface melting on fast ice. As the Antarctic summer continues, the fast ice will break away from the coast and drift out to sea.

The close-up view also reveals some details of the coastline, including glaciers that calve icebergs at or near the coast, and isolated melt ponds on the surface of the blue ice. 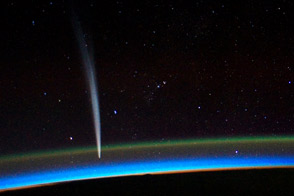