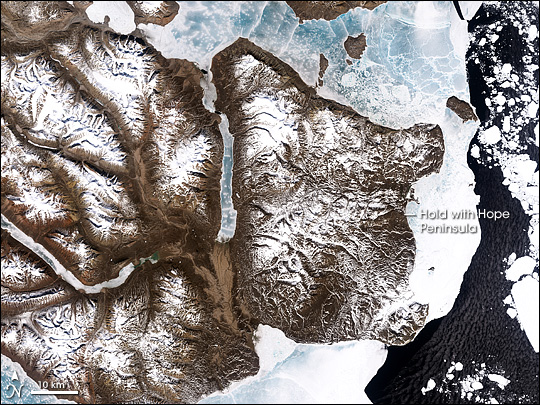 Ranging in color from snow white to turquoise, sea ice lined the shoreline in eastern Greenland in mid-June 2000. NASA’s Landsat 7 satellite acquired this image on June 16, 2000, shortly before the summer solstice when the Arctic enjoyed near round-the-clock sunshine.

Although snow and ice abound in this image, both are in retreat for the summer. Snowcaps form dendritic patterns on the brown landscape, leaving south-facing slopes especially bare. Around the Hold with Hope promontory, fast ice clings to the shoreline. Common over shallow ocean waters along shorelines, fast ice holds fast to the shore and/or sea bottom, not moving with winds or currents. Off the coast, pieces of bright white sea ice float on the sea surface, able to move with forces that don’s affect the fast ice.

Much of the fast ice in this image is blue, especially in the fjord north of Hold with Hope. Summer melt often lends ice a blue color due to water saturation. In addition, this ice could be what is known as blue ice, or ice composed of large crystals. Light that is visible to human eyes is composed of three basic components: red, green, and blue. Pure ice absorbs a miniscule amount of red light, reflecting slightly more green and blue light. This red-light absorption is lost in the noise of tiny snow crystals—the same way a piece of colored hard candy might appear white if it were pulverized. Large ice crystals make the red-light absorption visible to human eyes—just as sufficiently large pieces of glass would show a very subtle tint.

The relentless action of wind can transform snow crystals to large ice crystals. Away from the coast, snakes of ice make their way through inland fjords, and some of this ice is also blue.