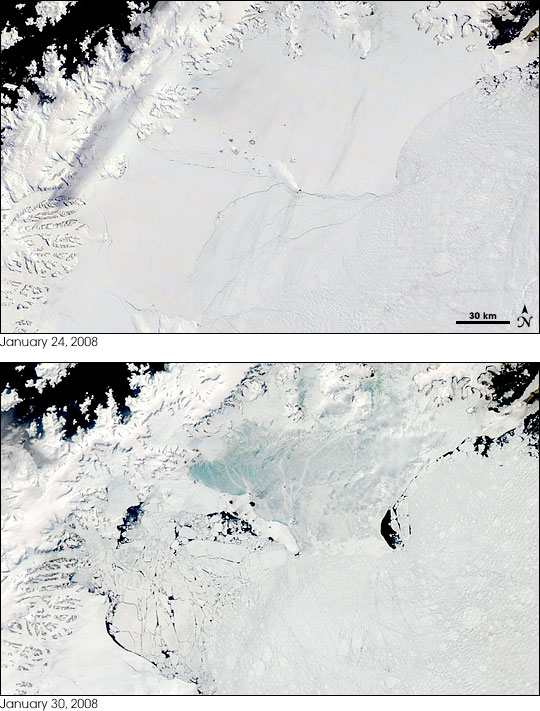 The tip of the Antarctic Peninsula showed dramatic seasonal changes in late January 2008. The Moderate Resolution Imaging Spectroradiometer (MODIS) on NASA’s Terra satellite captured the top image of the peninsula on January 24, 2008, when the fast ice—ice anchored to the shoreline—looked solidly frozen. Several days later, on January 30, 2008, the ice’s new blue hue suggested something had changed.

In the January 30 image, the blue color occurs in areas where the snow has melted, revealing a layer of sea ice underneath. This blue ice is pure ice composed of relatively large crystals. Ice absorbs a tiny amount of red light, which makes green and blue light reflected off the surface more prominent in photo-like images such as this. The red-absorption is more obvious in pure ice made of large crystals than it is in tiny snow crystals, which appear white. In this image, the blue ice indicates that temperatures have warmed enough to melt the snow layer. A thin film of water might also rest on the blue ice surface.

Just south of the blue-ice area is a thin band of ice that curls eastward vaguely like an arthritic finger. South of that is the area once occupied by the Larsen B Ice Shelf, which disintegrated over a period of several weeks in 2002. An ice shelf is a thick band of ice attached to a coastline and usually fed by a glacier. In the wake of the Larsen B breakup, sea ice—unattached to the land—often rests on the sea surface.

Although the change in between January 24 and January 30 appears dramatic, the signs of summer thaw actually arrived later than usual. La Niña can cause unusually cold temperatures over part of Antarctica, and this appeared to be the case in 2007. The breakup of fast ice around the Antarctic Peninsula generally occurs in early to mid-December, but this area remained solidly frozen well into January 2008.