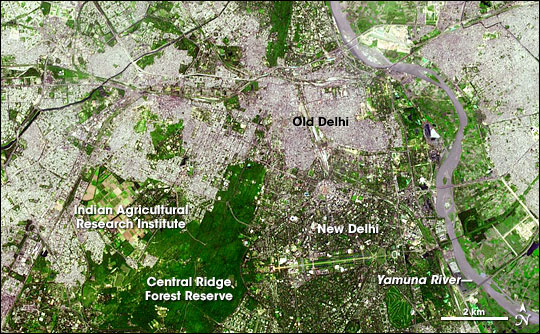 The capital of India, New Delhi is a city within a city—part of the Delhi metropolitan area, which occupies nearly 1,500 square kilometers (537 square miles) and is home to nearly 22 million people. New Delhi was established in the early 1900s as the capital of the British Empire in India, and it became the Indian national capital after the country gained independence in 1947. The city is simply Delhi’s newest incarnation; cities have been located at the site for thousands of years.

This image of New Delhi was captured by the Advanced Spaceborne Thermal Emission and Reflection Radiometer (ASTER) on NASA’s Terra satellite on September 22, 2003. The dramatic differences in the landscapes tell some of the city’s history. When the British moved the capital of their empire from Calcutta to Delhi, they built New Delhi on the west bank of the Yamuna River, south of the Old City. The Old City, which had been the last capital of the Mughal Empire, had densely packed, low-rise buildings, crowded along narrow, irregular streets. Little vegetation interrupted the urban expanse. In contrast, the buildings of New Delhi were laid out along wide, tree-lined avenues that connected monuments, parks, and government buildings. Among the most obvious of these avenues is the Rajpath, visible as a green strip across the heart of New Delhi. The Rajpath connects the grounds of the President’s estate on the west to the India Gate (a World War I memorial) on the east.

To the west of New Delhi is the Central Ridge Forest Reserve, which gives a hint of how the landscape would have looked before human development. The vegetation is a mixture of thorn scrub and woodlands. Ecologists debate how abundant the thorn scrub would actually have been in the pre-settlement landscape. It may be the result of degradation of the tropical dry forests through grazing and other agricultural activity over centuries. Northwest of the urban forest is a patchwork of fertile and fallow fields that are part of the campus of the Indian Agricultural Research Institute.