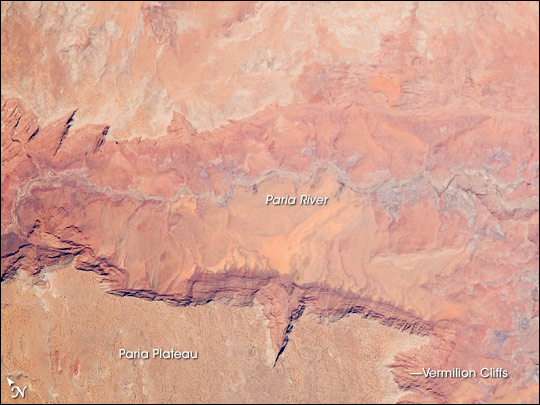 The largest tributary of the Colorado River between Lake Powell and the Grand Canyon, the Paria River flows southeast from its headwaters in southernmost Utah to join the Colorado River between Page, Arizona, and Marble Canyon. The Paria River provides spectacular scenery, and is known for the very narrow “slot” canyons that it cuts through the layered rocks of the Colorado Plateau. These canyons formed over millions of years by water erosion slicing deep into the rock layers. Exploring the river channel through the slot canyons is a popular activity for hikers and backpackers. Indeed, there is no road access to much of the river channel, and hiking in on foot is the only way to experience the slot canyons.

The Paria River also exposes the red and white layers of rocks beneath the Paria Plateau that are known as the Vermilion Cliffs (image center). These rocks record the changing environmental conditions of the region during the early Mesozoic Era (248 to 65 million years ago), ranging from widespread deserts to more water-rich periods when rivers flowed across the landscape. The spectacular scenery of the Vermilion Cliffs and Paria Canyon falls within the Vermilion Cliffs National Monument. This rugged and remote landscape is also home to many species of raptors, including the California condor, and other desert fauna like bighorn sheep.

Astronaut photograph ISS017-E-6110 was acquired May 2, 2008, with a Kodak 760C digital camera using an 800 mm lens, and is provided by the ISS Crew Earth Observations experiment. The image was taken by the Expedition 17 crew, and is provided by the Image Science & Analysis Laboratory, Johnson Space Center. The image in this article has been cropped and enhanced to improve contrast. Lens artifacts have been removed. The International Space Station Program supports the laboratory to help astronauts take pictures of Earth that will be of the greatest value to scientists and the public, and to make those images freely available on the Internet. Additional images taken by astronauts and cosmonauts can be viewed at the NASA/JSC Gateway to Astronaut Photography of Earth. Caption by William L. Stefanov, NASA-JSC.