Spring in the Canadian Arctic 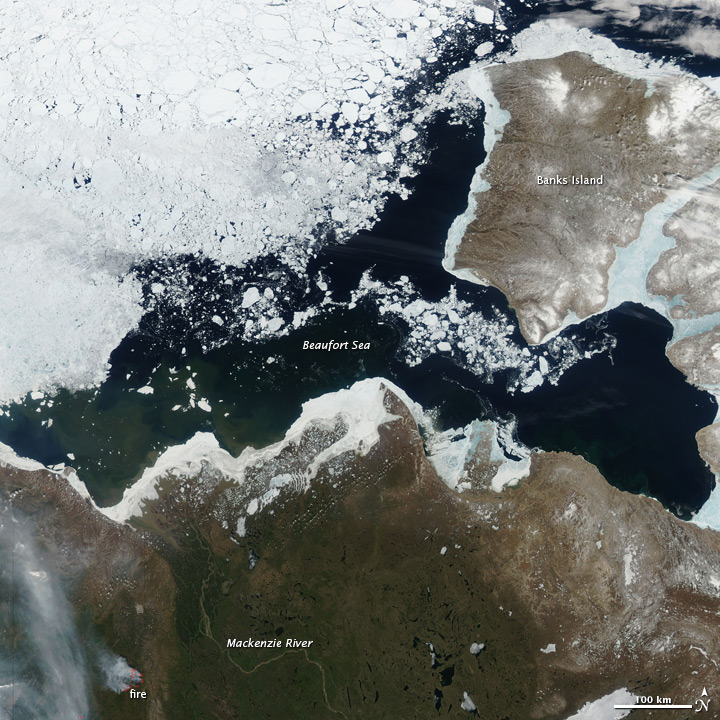 Nowhere is the coming of spring so dramatic as in the Arctic. Spring begins when the Sun rises over the North Pole on March 18 for the first time in nearly six months. Starting on June 6, everywhere north of the Arctic Circle is bathed in sunlight 24 hours a day. The ever-present Sun transforms the Arctic after a long winter of darkness and cold. This image, from the Moderate Resolution Imaging Spectroradiometer (MODIS) on NASA’s Aqua satellite, shows the western Canadian Arctic on June 10, 2010, a few days after perpetual sunlight commenced for the entire region.

The image captures the Arctic in a moment of transformation. Signs of winter are still present, but summer is clearly on the horizon. Sea ice in the Beaufort Sea has started to break up. A swath of open water, black in this image, separates the land from the dense pack of sea ice. Ice still fringes much of the land, but it is thinning. In many places, particularly around Banks Island, the land-bound sea ice is blue, pointing to thin ice or the presence of water on the ice.

Spring is beginning to touch land as well. While frozen lakes punctuate the landscape with white, many lakes are clear. The Mackenzie River flows ice-free to a broad partially frozen delta. Trapped behind a dam of ice, the muddy brown waters blur across the triangular delta. The water that is getting through the ice carries sediment into the Beaufort Sea, coloring the waters near the shore brown and green.

With access to constant light, flowing water, and warmer temperatures, plants are beginning to grow. The land around the Mackenzie River has a deep green hue. The line between tundra and forest runs through this image. The forest is dark green, while the tundra is still brown.

The land also shows the first sign of summer: large forest fires. One large forest fire is outlined in red. Smoke from nearby fires flows across the lower left corner of the image. The boreal forest needs fire to maintain the ecosystem, and large fires happen regularly in the summer. In the remote region shown here, lightning ignites most forest fires.

The large image shows a slightly broader area. It is also this highest-resolution version of the image. The MODIS Rapid Response Team provides the image in additional resolutions.

Taken on June 10, 2010, this true-color image captures the western Canadian Arctic in a moment of transformation. Signs of winter are still present, but summer is clearly on the horizon.