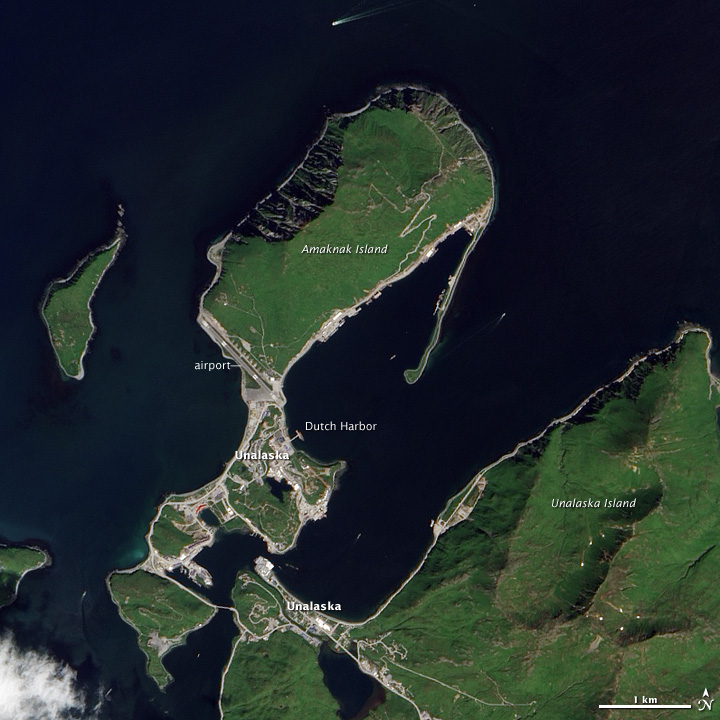 The small, remote town of Unalaksa, Alaska, is the last stop in civilization for a team of NASA-funded scientists, who will be leaving June 15, 2010, from Dutch Harbor on Amaknak Island for a five-week research cruise into the Arctic. Along with 85 Coast Guard crew members, a team of 43 scientists will head north aboard the U.S. Coast Guard Cutter Healy, the United States’ newest icebreaker, to study how climate change is affecting the ecology of the Arctic.

This natural-color image from the Advanced Land Imager (ALI) on NASA’s Earth Observing-1 (EO-1) satellite shows Unalaska and Amaknak Islands, which are part of the Aleutian Island chain that separates the North Pacific Ocean from the Bering Sea, on July 29, 2006. The city of Unalaska is split between the two islands: the northern part, where Dutch Harbor is located, is connected to the southern part by a bridge. The wakes of several ships are visible in the surrounding waters.