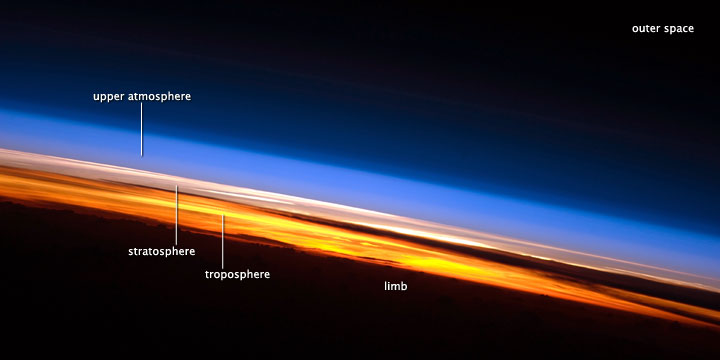 This spectacular image of sunset on the Indian Ocean was taken by astronauts aboard the International Space Station (ISS). The image presents an edge-on, or limb view, of the Earth’s atmosphere as seen from orbit. The Earth’s curvature is visible along the horizon line, or limb, that extends across the image from center left to lower right. Above the darkened surface of the Earth, a brilliant sequence of colors roughly denotes several layers of the atmosphere.

Deep oranges and yellows appear in the troposphere, which extends from the Earth’s surface to 6–20 km high. This layer contains over 80 percent of the mass of the atmosphere and almost all of the water vapor, clouds, and precipitation. Several dark cloud layers are visible within this layer. Variations in the colors are due mainly to varying concentrations of either clouds or aerosols (airborne particles or droplets).

The pink to white region above the clouds appears to be the lower stratosphere; this atmospheric layer generally has few or no clouds, and it extends up to approximately 50 kilometers above the Earth’s surface. Above the stratosphere, blue layers likely mark the transition between the middle and upper atmosphere as it gradually fades into the blackness of outer space.

The ISS was located over the southern Indian Ocean when this picture was taken, with the astronaut looking towards the west. Astronauts aboard the ISS see 16 sunrises and sunsets per day due to their high orbital velocity (greater than 28,000 km per hour). The multiple chances for photography are fortunate because at that speed, each sunrise or sunset only lasts a few seconds!

Astronaut photograph ISS023-E-57948 was acquired on May 25, 2010 with a Nikon D3 digital camera, and is provided by the ISS Crew Earth Observations experiment and Image Science & Analysis Laboratory, Johnson Space Center. The image was taken by the Expedition 23 crew. The image in this article has been cropped and enhanced to improve contrast. Lens artifacts have been removed. The International Space Station Program supports the laboratory as part of the ISS National Lab to help astronauts take pictures of Earth that will be of the greatest value to scientists and the public, and to make those images freely available on the Internet. Additional images taken by astronauts and cosmonauts can be viewed at the NASA/JSC Gateway to Astronaut Photography of Earth. Caption by William L. Stefanov, NASA-JSC.