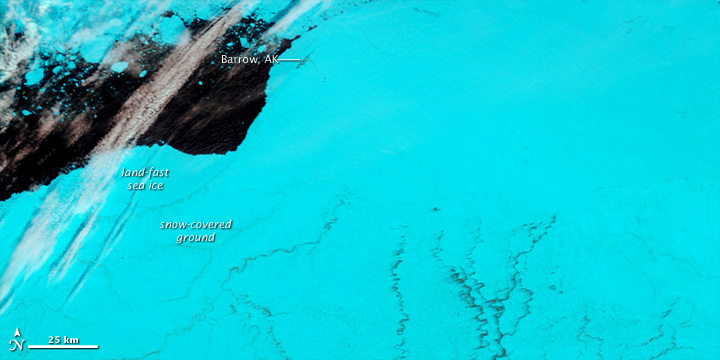 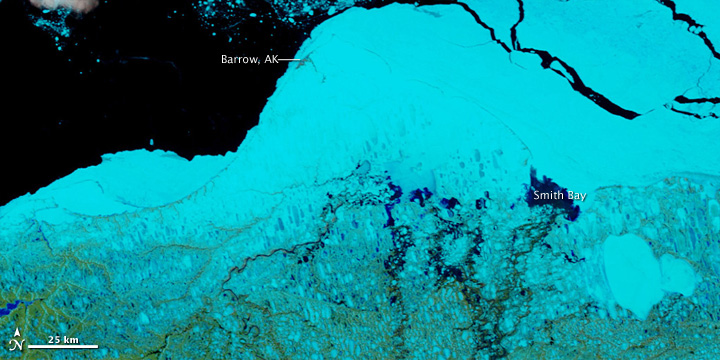 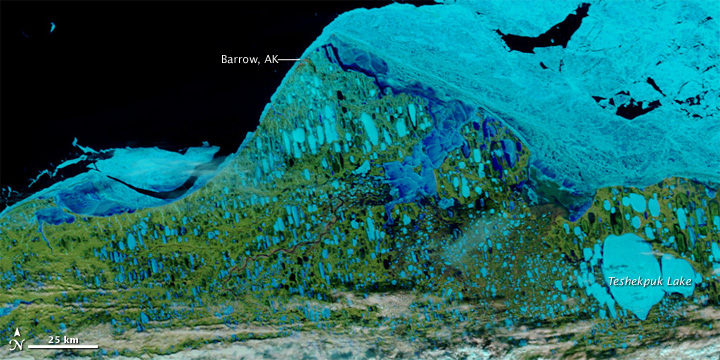 In the first weeks of June 2010, winter snow disappeared from the lake-dotted tundra of Alaska’s North Slope like a dust cover whisked off a stained glass work of art. These false-color images from the Moderate Resolution Imaging Spectroradiometer (MODIS) on NASA’s Terra satellite use a combination of visible, near-infrared, and shortwave-infrared light to make even muddy water stand out distinctly from the tundra. (This colorful view is dramatically different from photo-like images.)

On May 30 (top), a field of snow covered the North Slope, and in places, the land merged nearly imperceptibly with the ice-covered sea. The small town of Barrow, a gray smudge, was the only conspicuous feature across the northernmost part of the snowy expanse. By June 8 (middle) snow had retreated, and the boundary between land and sea was more obvious, especially in Smith Bay. In the final image, captured on June 15, hundreds of ponds, some round and others stretched into long ovals, were scattered across the tundra.

These ponds form because only the surface of the soil thaws here in the summer; in places, the maximum thaw depth is just a foot or two. Below, the ground is permanently frozen—permafrost—year round. The melted snow and ice can’t percolate deeply into the frozen ground below, and the flatness of the terrain slows drainage to the sea.

Permafrost in the Arctic is changing as climate warms, but not all areas are responding the same. The maximum thaw depth has increased in some places, but decreased in others. In some areas, lakes are draining as the permafrost below them thaws and cracks develop. Soil temperatures are rising, and as the soil warms, it releases increasing concentrations of greenhouses gases, in particular methane. To learn more about permaforst and climate change, please read Frozen Ground, an interview with permafrost expert Larry Hinzman.

In the first weeks of June 2010, winter snow disappears from the lake-dotted tundra of Alaska’s North Slope like a dust cover whisked off a stained glass work of art.

Snow Depth in the Northern Hemisphere