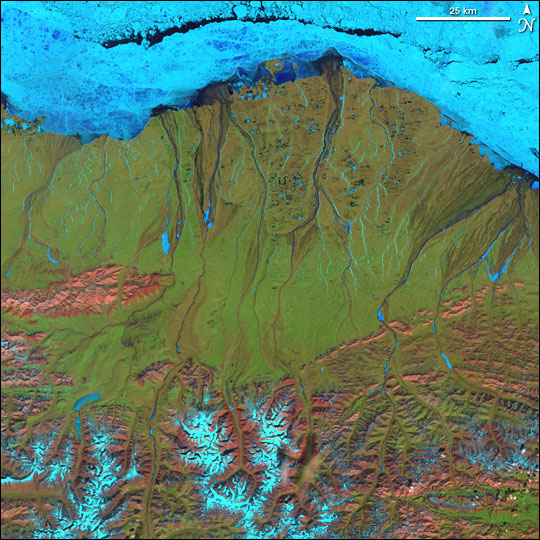 Along the northern Arctic shores of Alaska, ice, snow, and cold dominate the landscape, even on a sunny day in June. This false-color satellite image shows electric blue ice and snow, the green vegetation of the hardy plants and mosses of the tundra, the deep blue of flowing rivers and open ocean, and pink-hued outcrops of bare, rocky ground.

The tundra runs the length of northern Alaska and is known as the North Slope. Only a surface “active layer” of the tundra thaws each season; most of the soil is permanently frozen year-round. On top of this permafrost, water flows to sea via shallow, braided streams or settles into pools and ponds. Along the bottom of the image the rugged terrain of the Brooks Range Mountains is snow-covered in places (blue areas) and exposed (pink areas) in others.

The sea hadn’t surrendered to approaching summer. Along the coast, fast ice still clings to the shore in a solid, frozen sheet. At the top of the scene is the drifting sea ice. A dark blue strip of open water, known as a flaw lead, separates the fast ice from the drifting sea ice. Because the drift ice wanders freely with the wind and sea currents, it shatters into pieces that become rounded from the constant jostling.

These data were collected by Landsat 7’s Enhanced Thematic Mapper Plus (ETM+) instrument on June 16, 2001. The image was created by combining data from the shortwave-infrared, near-infrared, and green channels (ETM+ bands 7, 4, and 2 respectively).

Driven by strong winds and ocean currents, large blocks of sea ice crashed ashore in the town of Barrow, Alaska, on January 23 and 24, 2006.