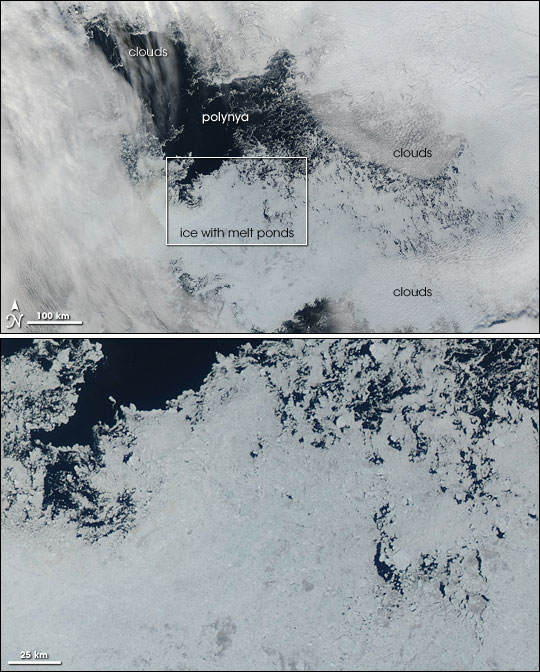 In August 2006, a polynya—an irregularly shaped area of open water—developed within the Arctic sea ice. Polynyas are not unusual, and some form in about the same place year after year, such as the “Northwater Polynya” in Baffin Bay. This new polynya, however, was unusual in that it appeared north of Alaska, in the Beaufort Sea—an area where satellites have not typically detected open water. Although a polynya formed north of Alaska in 2000, it was smaller and closer to the ice edge.

The Beaufort Sea polynya of 2006 formed in mid-August and continued to grow through early September. By September 11, 2006, the area of open water had grown to roughly the size of the state of Indiana—about 100,000 square kilometers (38,000 square miles). The Moderate Resolution Imaging Spectroradiometer (MODIS) on NASA’s Aqua satellite took this picture the same day. The top image shows the polynya and its immediate surroundings. In this image, the polynya appears as a sprawling black shape in the sea ice, the dark waters of the Arctic Ocean making a sharp contrast to the bright white expanse of sea ice that covers Earth’s northernmost latitudes.

The bottom image is a close-up view of the area immediately south of the polynya. In this image, the sea ice appears blue and more loosely packed than the ice farther north. The bluish color of the ice is the result of liquid water from melting on the surface of the sea ice. In mid-September 2006, scientists at the National Snow and Ice Data Center (NSIDC), who announced the development of the polynya, suggested that as temperatures cooled, the melting ice near the polynya would probably start to re-freeze, and the polynya would likely close up during the winter of 2006-2007.

Does this polynya result from warmer Arctic temperatures? Mark Serreze, a research scientist at NSIDC, suspects that it has more to do with winds forcing the ice on the surface to spread out in that area. As of late September 2006, however, the exact cause of this polynya was not clear. What is clear is that Arctic sea ice is in decline. Although the ice extent in the summer of 2006 did not match the 2005 record low, it remained well below the average extent for 1979-2000.