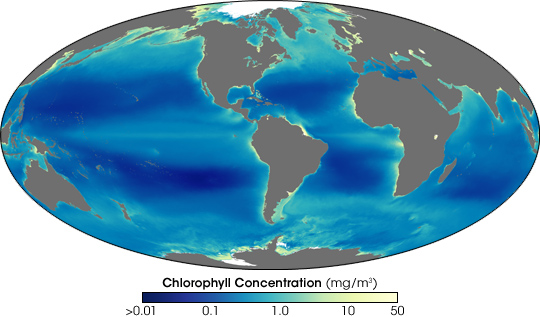 When we think about Earth’s sources of oxygen, we usually think of vast forests such as the Amazon, but about half of the oxygen we breathe comes from elsewhere; it’s produced by phytoplankton. Phytoplankton are tiny, single-celled plants that live in the ocean, and they serve as the base of the oceanic food chain. Yet as important as phytoplankton are to life on Earth, their interaction with our planet has only recently been studied on a global scale.

The satellite sensor that has pioneered the study of phytoplankton globally is the Sea-viewing Wide Field-of-View Sensor (SeaWiFS). SeaWiFS launched on August 1, 1997, and began taking measurements of the world ocean in September 1997. To convert sunlight to chemical energy, ocean plants use chlorophyll, the same chemical that gives terrestrial plants their green color. By measuring chlorophyll, SeaWiFS can determine the distribution and intensity of phytoplankton in the world ocean. In honor of the recent 9th anniversary of SeaWiFS operations, NASA scientists put together this 9-year average of global chlorophyll observations from the sensor.

Prior to the launch of SeaWiFS, scientists could only study phytoplankton on a relatively small scale. By measuring chlorophyll on a global scale over time, this sensor has been able to track how phytoplankton thrive and diminish as light and nutrient levels change. Massive phytoplankton blooms spread across the North Atlantic in the Northern Hemisphere each spring, and intense blooms also occur in the South Atlantic off the Patagonian Shelf of South America during spring in the Southern Hemisphere. Blooms fostered by changes in nutrient-rich water, though less regular, are also dramatic, especially when El Niño gives way to La Niña, and cold, nutrient-rich waters well up across the Pacific. SeaWiFS data have also demonstrated that Atlantic Ocean hurricanes cause ocean desert to bloom; the swirling hurricane raking over the ocean surface draws nutrient-rich water up from deeper in the ocean—fertilizing the marine desert.