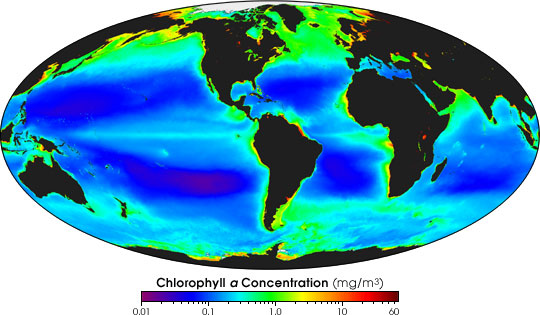 Launched on August 1, 1997, the Sea-viewing Wide Field-of-View Sensor (SeaWiFS) began collecting global data operationally in mid-September of that year and has been flawlessly gathering observations of ocean color for the past six years. While most of the light that is scattered back to space out of clear ocean water is blue, ocean water contains many things in addition to just water. These things can change the color of the ocean surface.

In coastal areas, runoff from rivers, sand and silt churned up from the ocean bottom by tides, waves, and storms are among the things that change the color of the near-shore waters. However, for most of the world's oceans, the most important things that influence its color are phytoplankton. Phytoplankton are very small, single-celled plants, generally smaller than the size of a pinhead, that contain a green pigment called chlorophyll. All plants (on land and in the ocean) use chlorophyll to capture energy from the sun that they use to drive photosynthesis. Although individual organisms are microscopic, phytoplankton can bloom in such large numbers that they can change the color of the ocean to such a degree that we can measure that change from space.

The image above is the average ocean chlorophyll concentration measured by SeaWiFS since launch. Scientists can infer how much phytoplankton the ocean waters contain by measuring how much chlorophyll is present. The image reveals the close relationship between physical and chemical ocean processes—like temperature differences and nutrient upwelling from the deep ocean that happens near coastlines—and ocean plant life. Chlorophyll (and therefore phytoplankton) concentrations are higher in coastal areas than they are in the open ocean. They also are higher in planet's northern oceans than the southern.

One of the interesting insights that came out of the generation of this multi-year chlorophyll map is the identification of the region of the world’s oceans that has the lowest chlorophyll concentration. That area, slightly west of Easter Island in the South Pacific Ocean (centered at 26 degrees South and 115 degrees West) had an average concentration of just 0.0186 milligrams of chlorophyll-a per cubic meter of seawater.

For more information on SeaWiFS and Ocean Color, visit the SeaWiFS Project homepage.