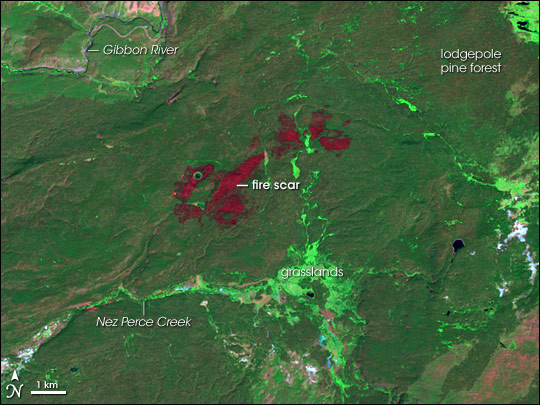 A deep red burn scar stretched across a remote section of Yellowstone’s Central Plateau on August 9, 2006, when the Landsat 5 satellite captured this image. The land was freshly charred by the Magpie Fire, which was still burning when the image was acquired. The fire was burning about seven miles east of Madison Junction (just beyond the left edge of the image) near the center of Yellowstone National Park. The fire burned through lodgepole-pine forest, the type of forest that covers 80 percent of the park. Around the fire, undamaged lodgepole-pine forest is dark green. In contrast, grasslands to the south and east of the fire are bright green. The grasslands surround Nez Perce Creek and other smaller waterways on the plateau. In the upper left corner of the image, a tan road follows the course of the Gibbon River. The road loops around the Central Plateau, connecting popular sites such as Old Faithful (southwest of the fire, just beyond the lower left corner of the image), Fishing Bridge, the Norris Geyser Basin, and Madison. The light pink land along the top left edge of the image is Monument Geyser Basin. The lighter green forest that surrounds the road is a mix of whitebark pine and Douglas fir trees.

In addition to showing the burn scar left by the Magpie Fire, this image illustrates some of the diversity found in the park. From forests of tall, straight lodgepole pines occasionally mixed with whitebark pine, to Douglas-fir forests, rustling groves of aspens, riverside grasslands, alpine meadows, or dry sagebrush shrub lands, Yellowstone National Park encompasses many different ecosystems, most of which have adapted to fire over thousands of years. Ignited by rainless lightning storms common on summer afternoons in the Intermountain West, fire plays an important role in clearing dead plant matter, returning nutrients to the soil, and helping young plants get started. For example, many types of lodgepole pine require fire to disperse seeds. Lodgepole pine cones are sealed with sticky resin and only release seeds when fire melts the resin away. With the undergrowth cleared, the ground freshly fertilized by ash, and the forest canopy thinned so that sunlight reaches the ground, the new seedlings have a much better chance of survival. Other plant species have also developed strategies for surviving the regular summer fires. Douglas fir trees, for example, are insulated by a thick layer of bark that protects the rest of the tree from fire.

Because fire is a natural and necessary part of so many ecosystems in Yellowstone, the National Park Service has adopted a strategy to allow naturally started wildfires that don’t threaten people, structures, or valuable resources to burn under supervision. The Magpie Fire was one such wildfire. The fire started on July 17, 2006, as a result of a lightning strike, and by September 15, had burned 3,105 acres, reported InciWeb, an interagency fire information system used by the U.S. Forest Service. Such fires either burn out, such as when wind pushes the flames back onto a previously burned region that has little remaining fuel, or are extinguished by rain or snow.