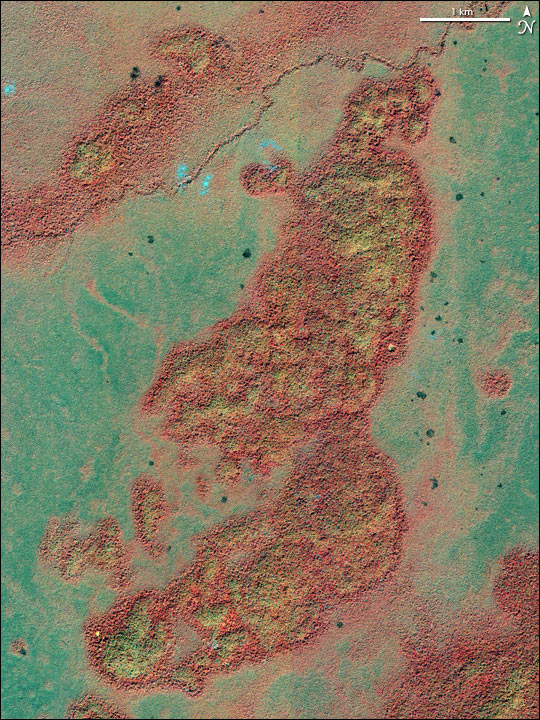 Around the eighth century A.D., one of the world’s densest populations in human history lived in Central America, thanks to a very efficient method of agriculture and irrigation. The population’s prosperity enabled its citizens to build impressive monuments, but after centuries of growth, the civilization disappeared. Today, you might wander through the ruins of an ancient Maya metropolis and not realize it. The jungles of Central America are dense enough to hide objects just a few meters away. While people on the ground might miss Maya ruins, scientists have recently discovered that satellites can detect ruin sites from space, even when the jungle has overgrown them.

On December 15, 2002, IKONOS captured this image of a bajo in Guatemala. Bajos are lowland areas where rainwater accumulates, and archaeologists suspect that the ancient Maya used these areas for irrigation of their crops. This area also includes remains of Maya structures. In a natural-color (photo-like) image, the changes caused by the ruins would be hard to distinguish from the natural variation in the green forest canopy. The best way to find them is to look at the visible and near-infrared spectra, shown in the false-color image. In this type of image, the forest covering the ruin sites appears yellowish, as opposed to the red color of surrounding forest. The more sparsely vegetated bajos appear blue-green.

Why do the Maya ruin sites appear unique in the false-color images? The Maya built their monuments from limestone. As the monuments deteriorated, they affected the chemical makeup of the soil. Some moisture-loving plants stayed away, while others were killed off or discolored. The effects of the limestone ruins, indicated by the yellowish areas, are still apparent today to some satellite sensors. NASA archaeologist Tom Sever pioneered the use of remote-sensing data in finding archaeological sites. In 2004, he and his longtime colleague Dan Irwin, both of NASA’s Marshall Space Flight Center in Huntsville, Alabama, teamed up with William Saturno of the University of New Hampshire to test satellite data on the ground. They examined satellite imagery for characteristic signatures of ancient ruins, then visited those localities on foot. They found Maya ruins exactly where the satellite data predicted the ruins would be found.

What happened to the ancient culture that once flourished in Central America? According to Sever, the population likely succumbed to a combination of natural drought and anthropogenic (human-caused) deforestation. Understanding how the Maya affected their environment, Sever feels, may help modern humans make more informed choices about how to work with today’s rainforests.

Risk maps can help land managers make more informed decisions about modern development in the vicinity of an ancient civilization.