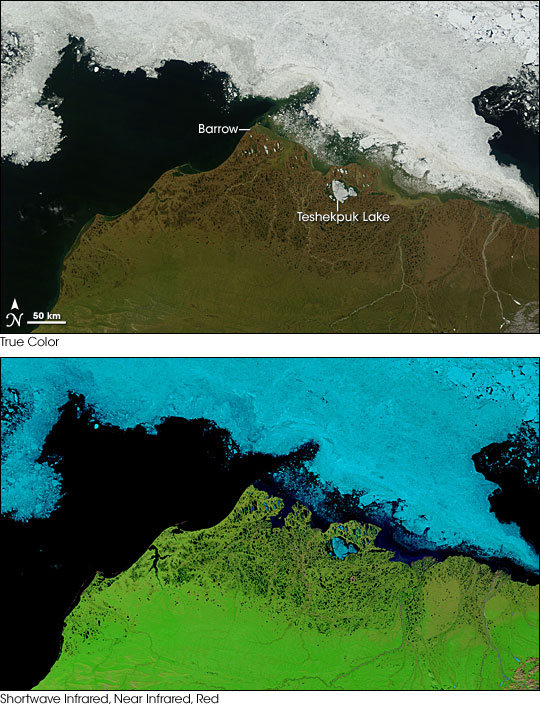 Pools of melt water collected on Alaska’s North Slope in early July 2007. On July 6, 2007, the Moderate Resolution Imaging Spectroradiometer (MODIS) flying on NASA’s Terra satellite captured these images. The top image shows the area in true color, similar to how human eyes would see it from the sky. The bottom image uses a combination of shortwave infrared, near infrared, and red light. In this false-color image, red-brown indicates bare ground, green indicates vegetation, light blue indicates ice, and deep blue-black indicates water. Water appears especially pronounced in this image, including the many melt ponds near the coast that give the coastline a spongy appearance.

The spongy appearance is caused by permafrost. Permafrost is soil whose temperature remains below freezing for two years or longer. Permafrost is rock-hard, and it doesn’t allow water to easily seep through. When summer’s warmth melts the snow and ice in northern Alaska, the water remains pooled on the surface, as in these images. While water pools remained intact in Alaska, however, Arctic lakes in Siberia had drained. According to a report in Science Daily, findings by the Ingergovernmental Panel on Climate Change suggested that permafrost thaw might have allowed Siberian lakes to drain.

A 2004 Arctic Climate Impact Assessment report stated that in permafrost-rich regions, a study of temperatures and snow depths between 1930 and 2003 showed that warming had predominated since 1950, despite interannual variability. The report also cited soil models projecting future change in northern Alaska, including temperature increases ranging from 1 to 5 degrees Celsius (1.8 to 9 degrees Fahrenheit) by 2100. All but one of the models included in the study projected a zone of permafrost degradation would exist in northern Alaska by 2100.

Although permafrost leaves the ground rock-hard and unyielding, its disappearance can damage infrastructure that depends on it. If frozen ground thaws and softens, rail lines, roads, runways, and plumbing lines can deteriorate. Just weeks before MODIS captured these images, the Institute of Social and Economic Research at the University of Alaska Anchorage released a report detailing potential costs Alaska could incur from melting permafrost. The report estimated that the cost of building and maintaining Alaskan infrastructure could increase by 10 to 20 percent until 2030 (an extra $3.6 to $6.1 billion), and by 10 percent (an extra $5.6 to $7.6 billion) until 2080. The report estimated higher costs early on as the researchers anticipated that the state could adapt to melting permafrost in coming decades, thereby reducing infrastructure costs.