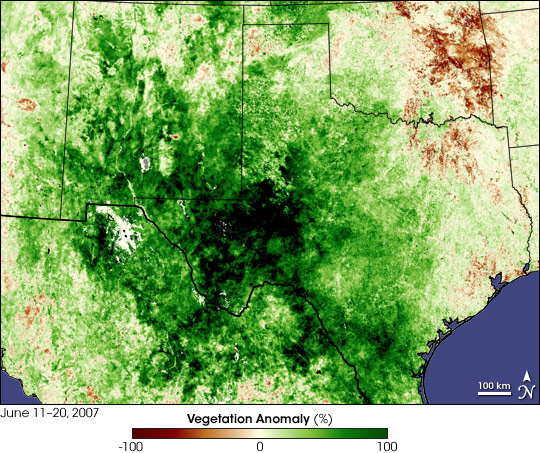 June 2007 was one of the wettest Junes on record for the state of Texas. Starting in late May, a string of low-pressure systems settled in over the U.S. Southern Plains and unleashed weeks of heavy to torrential rain. During the final week of June, much of Texas, Oklahoma, and Kansas received more than 330 percent of their average rainfall, said the National Climatic Data Center. The widespread heavy rain brought deadly floods to the entire region. On July 6, the Associated Press reported that every major river basin in Texas was at flood stage, an event that had not occurred since 1957.

In addition to causing floods, the rains stimulated plant growth. The grassy, often arid, plains and plateaus of northern Mexico (bottom left), Texas (center), and New Mexico (top, left of center) burst to life with dense vegetation as this vegetation anomaly image shows. Regions where plants were growing more quickly or fuller than average are green, while areas where growth is below average are brown.

Most of Texas is green, with a concentrated deep green, almost black, spot where vegetation growth was greatest. This area of western Texas is where the Pecos River flows out of New Mexico and heads southeast to the Rio Grande. In the darkest areas, vegetation was more than 100 percent above average. The brown spots in northeastern Texas and Oklahoma (top, right of center) may be areas where persistent clouds or water on the ground are hiding the plants from the satellite’s view. Plants may also be growing less than average if swamped by too much rain. The image was made with data collected by the SPOT satellite between June 11 and June 20, 2007.