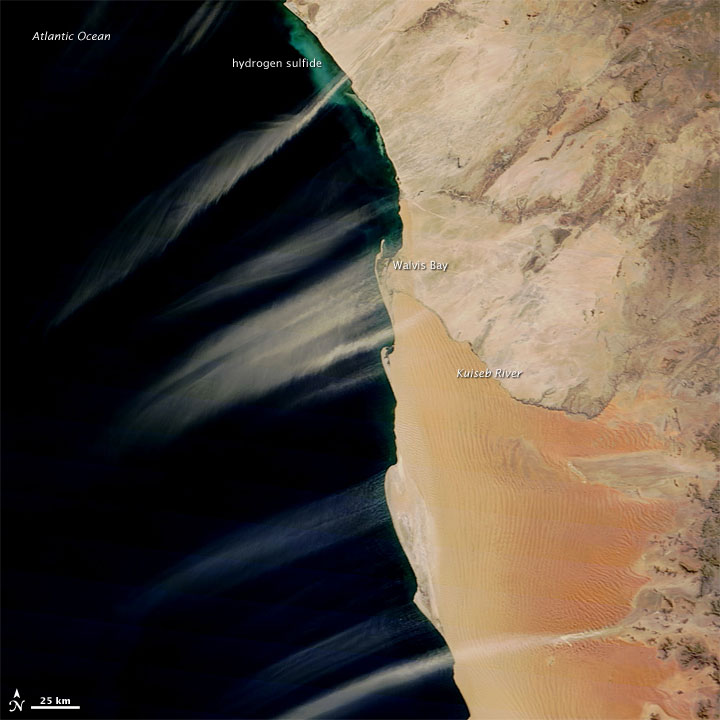 Slivers of peacock green near the shore betray the presence of hydrogen sulfide emissions. A study published in 2009 found that the frequent hydrogen sulfide emissions in this area result from ocean-current delivery of oxygen-poor water from the north, oxygen-depleting demands of biological and chemical processes in the local water column, and carbon-rich organic sediments under the water column. When the hydrogen sulfide gas reaches oxygen-rich surface waters, pure sulfur precipitates into the water. The yellow color of sulfur turns the dark blue water green.

Near the hydrogen sulfide eruptions, multiple, linear dust plumes extend over the Atlantic. Most of the plumes appear to originate from stream channel sediments, and they retain the pale beige color characteristic of such sediments. Wind kicking up dust and pushing it seaward is a common occurrence along the Namibian Coast. Easterly trade winds from the Indian Ocean lose much of their moisture as they pass over the African continent. By the time they reach the Namibian coast, the winds are hot and dry, and they dry out even more as they pass over Namibia’s low-lying coastal plain.

The Namib Desert stretches hundreds of kilometers along Namibia’s coast, but the desert is not uniform. The Kuiseb River, which empties into the Atlantic Ocean just south of Walvis Bay, marks a dramatic transition in land cover. South of the river, giant sand dunes march northward, driven by relentless winds, but the vegetation along the Kuiseb River provides a barrier to both the wind and the dunes’s continued movement. North of the river, the land surface consists primarily of gravel plains, from which isolated rocky hills emerge.

Besides sand and wind, the coast of Namibia is known for a luxury good: diamonds. An accidental discovery in the early twentieth century sparked a diamond rush, and by 1913, Namibian diamond mines accounted for 20 percent of the world’s supply. Rivers and streams carry the stones from diamond-rich volcanic rocks (kimberlites) to the coast. The gems that survive the long journey tend to be high-quality with few flaws. 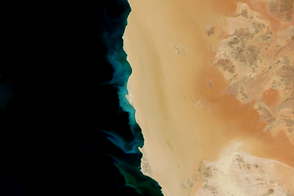 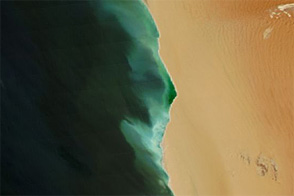