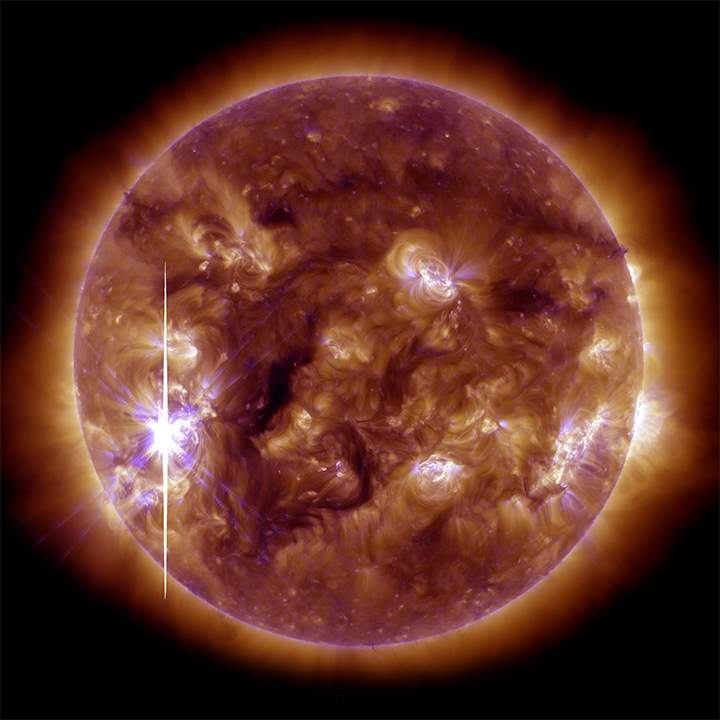 On November 5, 2013, the Sun brightened when an X-class solar flare—the largest so far this year—burst from a large, active sunspot. The flare followed a series of more than a two dozen flares that have occurred since October 21, though the November 5 flare originated in a different active region. The event was classified an X3.3 flare, falling into the category of most intense explosions.

This view of the flare comes from NASA’s Solar Dynamics Observatory (SDO), and it shows the Sun in extreme ultraviolet light (blending 193 and 131 angstrom observations). The long streak of light is likely due to solar protons saturating the imager. The unusual color is due to the blending of false colors that are assigned to each wavelength by solar physicists to distinguish the different bands. The image is from 5:12 p.m. Eastern Standard Time (22:12 UTC), the peak of the short flare.

A solar flare is a burst of light and radiation from the Sun’s magnetic atmosphere. The energy travels at the speed of light to reach Earth just eight minutes after the flare; at Earth, a part of the atmosphere called the ionosphere absorbs it. Normally, that’s the end of the story, but this flare was unusual. It had a very quick rise and a very quick decay, says Alex Young, associate director for science in the heliophysics division of NASA Goddard Space Flight Center. The burst of energy triggered electric currents in the ionosphere, which in turn generated a magnetic field. TThe quick burst of energy caused a surge of electric currents in the ionosphere. All electric currents generate magnetic fields, and the fast surge caused by the flare creates a magnetic field strong enough to be measured from the ground. This rare bump in the magnetic field from a solar flare is called a magnetic crochet.

Since solar flares heat and distort the ionosphere, they can interfere with radio communication. The NOAA Space Weather Prediction Center warned of a potential blackout of shortwave radio communication for about an hour after the November 5 flare. This type of communication is often used for long-range aviation, amateur radio, and emergency communication. Beyond radio interference, the flare did not affect Earth.

The recent burst of solar activity is part of a natural 11-year cycle that may be nearing its peak, says Young. It comes after an extended quiet period, with the last significant flares in May. While the November 5 flare isn’t significant on its own, each flare is valuable to scientists trying to understand the Sun. “Every flare is different,” says Young. “They are complicated because so much is going on. Because of that, each flare gives us more insight into what is happening. The more flares we see, the more we can sample the different variations.”