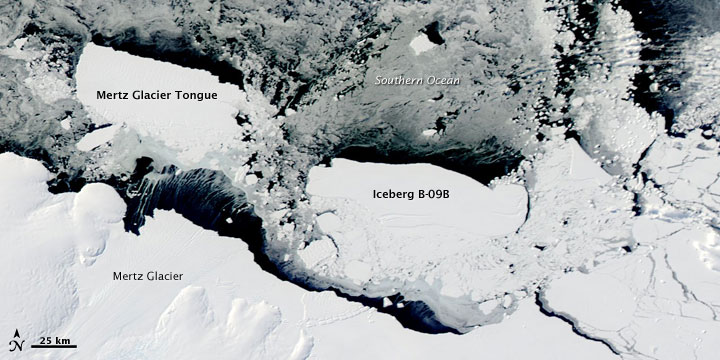 As two giant icebergs lingered along the coast of Antarctica in early March 2010, katabatic winds both created ice and swept it away from the continent.

On March 11, 2010, the Moderate Resolution Imaging Spectroradiometer (MODIS) on NASA’s Aqua satellite captured this true-color image of Iceberg B-09B and the iceberg recently broken off the Mertz Glacier. Antarctica’s icy surface and the nearby icebergs are bright white. Open ocean water is navy blue. Sea ice, some of it newly formed, appears blue-gray, and it covers much of the ocean surface.

Antarctica’s katabatic winds are frigid, and as they blow over the ocean water, they produce ice crystals on the sea surface. The same wind that forms ice crystals, however, blows the newly formed sea ice northward. The process of sea ice formation and movement is interrupted by icebergs—not just the piece broken off the Mertz Glacier Tongue and the B-09B Iceberg, but also smaller chunks of ice. On the leeward sides of these icebergs, open ocean water predominates. The icebergs partially block the katabatic winds, preventing ice formation in small areas. A similar area of open water occurs along the coast.

Two massive icebergs drifted along the coast of East Antarctica in early March 2010.