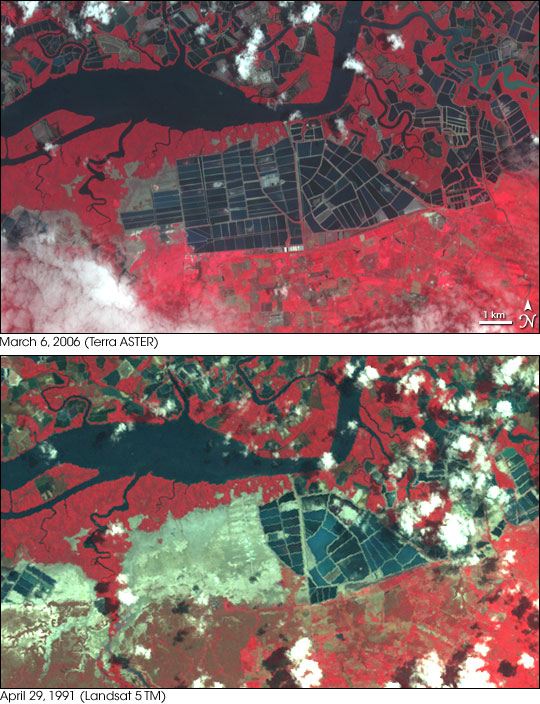 Like fields of blue, rectangular shrimp farms line the coast of Ecuador south of the city of Guayaquil in these images. Worldwide, wetlands and coastal mangrove forests have been converted to shrimp ponds in order to farm these crustaceans for food and sale. In Ecuador, the industry started in the late 1960s and rapidly grew. By 1999, 175,255 hectares of land had been converted to shrimp farms. That year, Ecuador was the fourth largest shrimp producer in the world, and the largest in the Western Hemisphere, according to the United Nations Food and Agriculture Organization.

In Ecuador, as elsewhere, shrimp farms are typically built along the shore where salt water is easily accessible. Though Ecuador’s mangrove forests declined as shrimp farming and other coastal development occurred, salt flats or salt marshes on slightly higher ground have also been converted, as illustrated in these images. The lower image was taken by the Landsat satellite on April 29, 1991. Shrimp farms cover much of the land shown in the image, but a broad swath of tan-gray salt flat still lines the inlet. By March 6, 2006, when the Advanced Spaceborne Thermal Emission and Reflection Radiometer (ASTER) satellite took the top image, the salt flat had almost entirely been converted to shrimp farms. A small canal connects the network of shrimp tanks to the inlet, providing a fresh source of water.