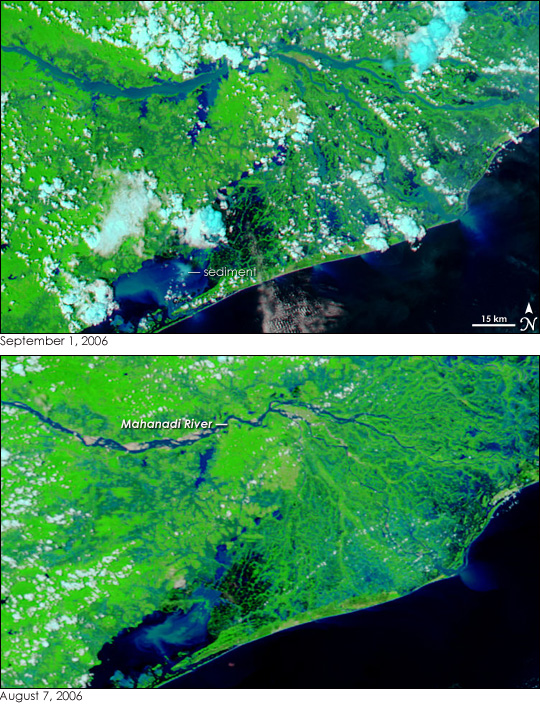 The Mahanadi River was flowing over its banks on September 1, 2006, when the Moderate Resolution Imaging Spectroradiometer (MODIS) on NASA’s Aqua satellite captured the top image. The river, one of the longest in India, ordinarily meanders across a fertile plain to drain into the Bay of Bengal through a broad delta, but starting in early August, heavy monsoon rains pounded the river basin, causing widespread flooding. Floods were already impacting the region on August 7, when the lower image was taken. Nearly a month later, the Mahanadi ran high and wide, the flood erasing the meandering curves seen on August 7. The water had gone from dark blue to pale blue, a sign that mud-laden run-off filled the river. Clouds of light blue sediment pour into Chilka Lake (lower left corner) and the Bay of Bengal from the flooded river. By September 3, floods along the Mahanadi had displaced more than two million people, reported the Dartmouth Flood Observatory.

These images were created with infrared light to create more contrast between water and land. In this type of image, water is black or dark blue, but appears lighter when it is clouded with sediment. Plant-covered land is bright green, while barren or sparsely vegetated land is tan. Clouds are turquoise blue and white. A photo-like, true-color version of these images is available from the MODIS Rapid Response Team.