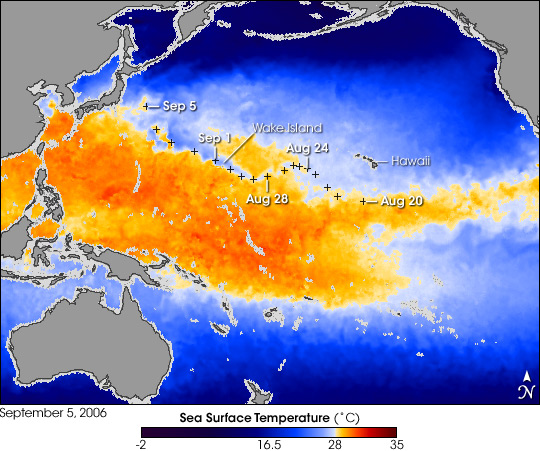 On Saturday, August 26, 2006, the National Weather Service’s Central Pacific Hurricane Center in Honolulu issued its final advisory report for Hurricane Ioke—not because the storm had fallen apart, but because the long-lived and well-traveled storm had passed outside of its monitoring area. As Ioke headed farther west in the Pacific, the storm—called a typhoon after it crossed the International Dateline—was monitored by the Japanese Meteorological Agency. Ioke formed on August 19, and rapidly intensified into a hurricane. Eventually the storm would hit the top of the hurricane intensity scale, becoming a Category 5 “super typhoon.” Ioke was at this strength when it plowed over tiny (completely evacuated) Wake Island. On September 6, a Coast Guard ship was en route to the island carrying a team who would assess the damage to the island’s airport and other structures.

This image shows the cool-water wake that Ioke left behind as it traveled across the Pacific Ocean from its birthplace south of Hawaii on August 19 to within several hundred kilometers of Japan as of September 5, 2006. Based on sea surface temperature data from Japan’s Advanced Microwave Scanning Radiometer for EOS (AMSR-E), which flies onboard NASA’s Aqua satellite, the image shows waters that are warm enough to fuel tropical cyclones in shades of yellow, orange, and red, while areas that are generally to cool to fuel cyclones are blue. The black crosses mark the position of Ioke at the start of each day (0:00 Universal Coordinated Time). A ribbon of cool water cuts through the broad swath of yellow in the central Pacific along the path of the storm. Shallow coastal areas where data were not collected are light gray.

The primary cause of the cool-water wake along the path of the storm is that powerful winds circling inward toward the low air pressure at the eye of the storm force surface waters outward, away from the storm. Deeper, cooler water wells up to replace the surface waters. A secondary cause of the cool-water wake is evaporation of water vapor from the sea surface. The hurricane “heat engine” converts the heat energy that is latent in water vapor into air movement. This heat loss adds additional cooling in the hurricane’s wake.

For more images of Hurricane/Typhoon Ioke during its trek across the Pacific, please see the Tropical Storm Ioke event in the Natural Hazards: Severe Storms section of our Website.