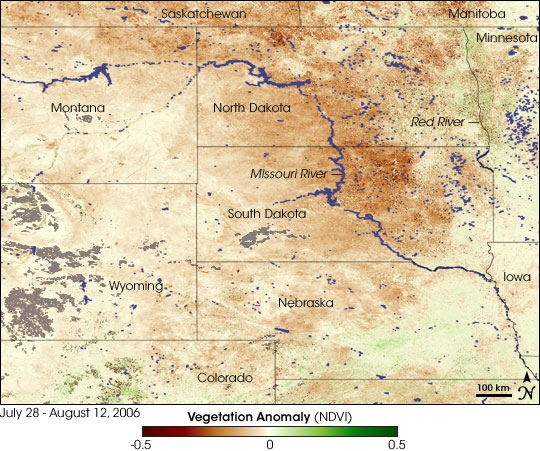 Across the Great Plains of the United States and Canada, devastating drought spread across grasslands and croplands in summer 2006. Poor winter snowfall and a blisteringly hot summer following several years of dry conditions have created a dire situation for many farmers and ranchers across the region. According to a recent article on the New York Times Website, many people are comparing the conditions to the Dust Bowl of the 1930s.

Vegetation was faring worst along the Missouri River through North and South Dakota, but below-average vegetation conditions stretch across parts of Montana, Wyoming, Colorado, northwestern Nebraska, and Minnesota as well. The plains of Canada’s Saskatchewan and Manitoba provinces were suffering drought, too. A few small pockets of green in the image reveal where vegetation greenness values observed by MODIS were higher than average: the mountains of north-central Colorado, southeastern Nebraska, and the Red River Valley. The Red River Valley experienced widespread snowfall and heavy rains in the spring of 2006, leading to significant flooding. The early-season moisture may have helped the vegetation in the area withstand the hot summer. According to the August 29, 2006, update from the U.S. Drought Monitor, most of the Northern Great Plains, as well as much of Oklahoma and Texas, was still in the midst of drought, with many areas falling into the highest category: exceptional drought.